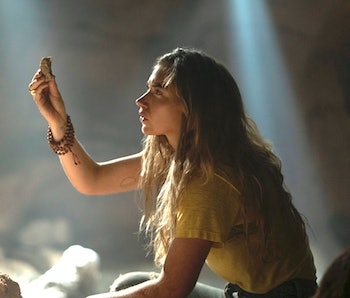 The gaping maw at the center of the new Amazon Prime series Outer Range is — understandably — a mystery that makes you want to know what it is, where it came from, and what it’s for. It’s tempting to compare the spacetime hole, and by extension all of Outer Range, to Stranger Things and the Upside Down.

And yet, for all the superficial similarities these two shows share, the Upside Down is not like the hole on the Abbott ranch, and Outer Range is so much more than a western version of Stranger Things. Spoilers ahead for Outer Range Episodes 1 through 4.

What makes Outer Range the antithesis of so many science fiction narratives can be found in an opening monologue from Royal Abbott (Josh Brolin) in Episode 3, “The Time.” He waxes poetic about the formation of the Earth and the way human beings have changed and grown, concluding, “There was storms and seasons and fences and blood, wonder and vengeance and regret... and the land and the sky didn’t give two shits.”

If Outer Range were an older show from a bygone era, you could almost imagine this as the opening monologue that accompanies every single episode. It invites the audience to think profound thoughts about the nature of existence and the march of time, and then it mocks you for trying to draw a connection between your human philosophizing and the crushing indifference of the natural world.

Everything you need to know about Outer Range can be found in this idea: The complex events of the series don’t revolve around any kind of “chosen ones” or destinies for heroes. The land, the sky, and the massive time portal don’t give two shits, and the characters are just going to have to deal with that.

In contrast, a series like Stranger Things makes it seem like nearly everything that happens to the kids could only happen to them. While there’s a certain kind of Steven Spielberg zest to both shows (and creator Brian Watkins cops to being inspired by Spielberg movies), the difference is that Outer Range doesn’t romanticize or go out of its way to explain the massive time-space hole.

In Stranger Things — and a lot of science fiction TV — unraveling the mystery of a sci-fi MacGuffin becomes the only way the characters can move forward. In Outer Range, there aren’t any complex discussions about the nature of the hole, which makes it a lot different from the endless discussions of the Upside Down in Stranger Things.

Yes, we see a few books on quantum mechanics in Autumn’s (Imogen Poots) tent, but it’s not like she lectures Royal about the nature of time travel. There’s no “wibbly-wobbly, timey wimey” speech here, which is important. Sure, the audience is wondering what the hell is going on with the time portal, but nobody is breaking character to directly address the audience about those obscured machinations. Just like the land and the sky don’t care about the people, the characters in the show don’t care about the audience.

This last detail is crucial. So often discussions about big TV shows become conflated with what audience culture wants the show to do. Because Outer Range doesn’t have nostalgia-evoking aspirations like Stranger Things, it avoids what you can think of as a Ready Player One-style nostalgia trap. In other words, the gaping time portal in Outer Range can remind you of the Upside Down in Stranger Things without it having to slavishly become some sort of homage to everything.

As a piece of new science fiction, this puts Outer Range ahead of many shows that may have similar subject matters. It’s not beholden to other tropes you’ve seen in time travel or sci-fi stories before. But because the characters seem self-contained in their actual reality, the show isn’t overly self-conscious about its independence, either. The time portal in Outer Range doesn’t care about the audience, and neither do the characters. This makes the series not only frightening, but it’s also the reason we can’t look away.