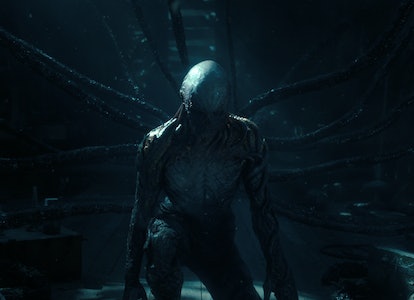 There’s a new villain in the Upside Down. The latest trailer for Stranger Things Season 4 recently confirmed as much, offering fans their first look at a monstrous, humanoid figure the likes of which they’ve never seen in the Netflix series. The mysterious creature tells the show’s heroes that they’ve “broken everything” before promising that their “suffering is almost at an end.”

As of now little is known about the villain, including exactly what his relationship is to the Upside Down, the realm’s Demogorgons, and the citizens of Hawkins. That said, it looks like the character was inspired, like so many of Stranger Things’ antagonists, by one iconic Dungeons & Dragons villain.

Who is Vecna in Stranger Things?

Following the release of Stranger Things Season 4’s trailer, series creators Matt and Ross Duffer confirmed to IGN that the mysterious villain featured in the teaser is named Vecna. The Duffer Brothers didn’t reveal much more about the character, but they did mention that he’s partly inspired by iconic movie villains like Freddie Krueger, Pinhead, and Pennywise.

Vecna is a name that will be familiar to Dungeons & Dragons players (and Critical Role fans). The character is a longtime D&D villain, one who used his abilities as a mage to turn himself into a lich (an undead magician) in order to avoid a mortal death. Despite achieving immortality, Vecna’s physical body was almost completely destroyed by his follower, Kas. After Kas’ betrayal, the only fragments that remained of Vecna’s body were his left hand and eye.

Vecna, however, didn’t die with his body. Instead his spirit and legend lived on, and he eventually amassed enough followers to be considered a minor god. His rise in power only intensified his desire to ascend to full godhood, and influence and cosmic travels resulted in him becoming a threat reviled and feared throughout the entire D&D multiverse.

Taking all that into account, it seems fair to assume that Stranger Things’ latest villain is going to be a force to be reckoned with, although it remains to be seen exactly how much Stranger Things’ Vecna has in common with his D&D counterpart; he certainly isn’t the first villain on the show to be named after a D&D character.

The show’s versions of the Mind Flayer and the Demogorgons have never been direct adaptations of the D&D creatures they’re named after. Instead, they were loosely inspired by the creatures. Odds are the same will prove to be true for Vecna. That doesn’t mean the new Stranger Things villain won’t take certain cues from D&D though. The D&D villain’s ability to travel throughout the multiverse could very well be a part of the new Stranger Things figure’s backstory, as could his desire to conquer all other worlds.

We do know that the second episode of Stranger Things Season 4 is titled “Vecna’s Curse,” which suggests that fans won’t have to wait too long before learning more about the series’ newest villain.

The Inverse Analysis — Stranger Things fans have long wondered whether the Upside Down is the only alternate reality that exists in the show. No one involved has offered any indication that there are more realities to be explored in the series, and Vecna does appear to reside in the Upside Down in the latest trailer. But if there are other realities in the world of Stranger Things, then it’s possible the show will use Vecna to introduce them.

Even if it doesn’t, his link to one of Dungeons & Dragons’ most feared antagonists already does enough to suggest that he’ll bring a very different presence to the series than Stranger Things’ previous villains have.