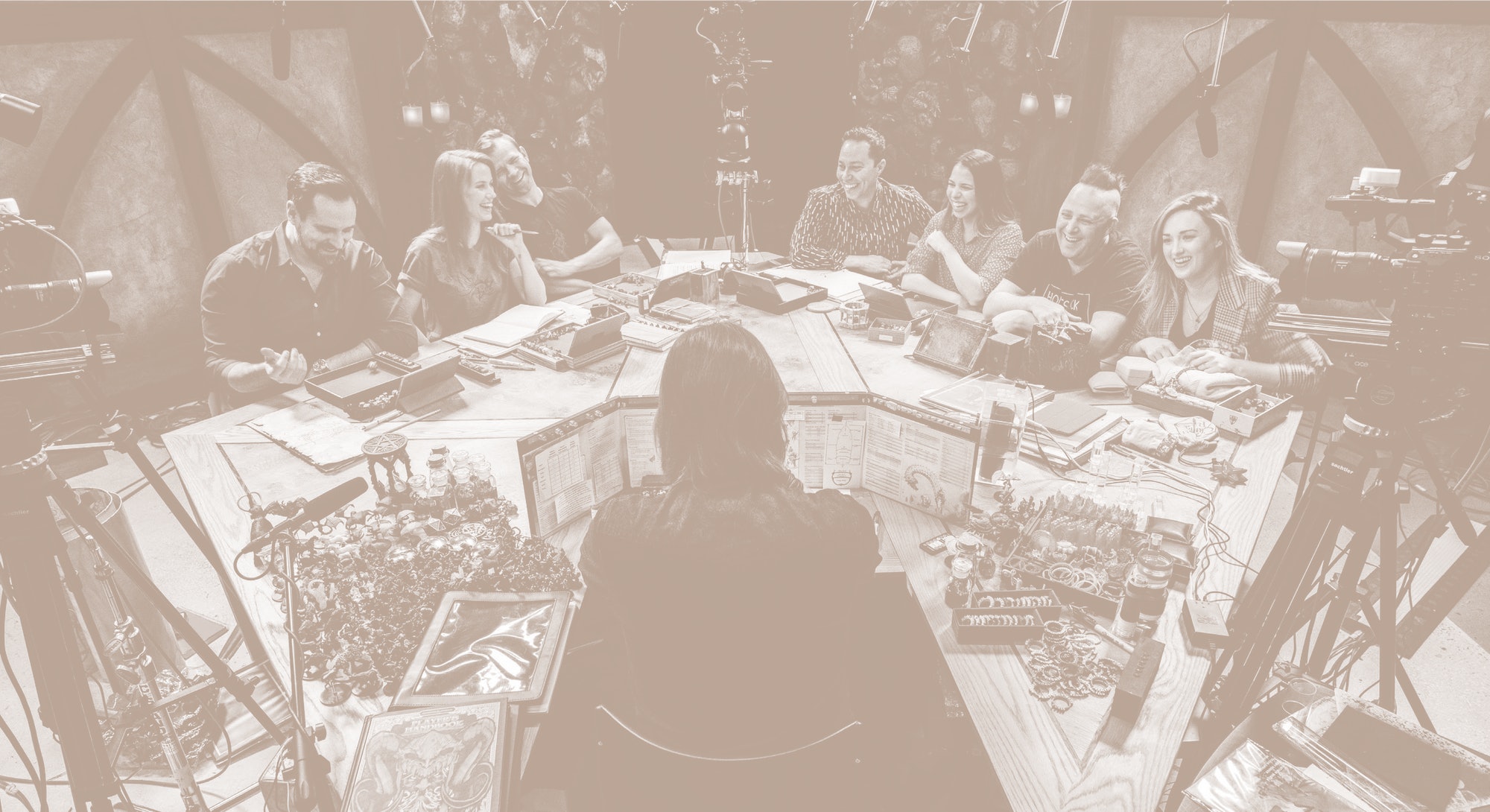 Like any game of Dungeons & Dragons, the story of Critical Role has a little magic and a little luck.

It started as a private game of D&D among friends. They were bonded by a career choice — all professional voice actors in the insular video game and anime scenes — and a love for the fantasy role-playing game.

They never intended to make a show. But after taking their game sessions to the livestream platform Twitch, Critical Role is now one of the biggest and most influential Dungeons & Dragons shows on the internet. With more than 600,000 followers on Twitch, over a million YouTube subscribers, over 440,000 followers on Twitter, and $11.3 million raised on Kickstarter for an animated series, the people behind it are constantly taken by surprise.

A new coffee table book, The World of Critical Role: The History Behind the Epic Fantasy by Liz Marsham, chronicles the group's meteoric and unlikely rise since 2015. But how has Critical Role endured the challenges of 2020? Cast members Liam O'Brien and Travis Willingham (also Critical Role's chief executive officer) reflect with Inverse on adjusting to a hellish year.

"2020 is a bit of a chrysalis for us," O'Brien tells Inverse. "We went inside of it, disappeared, and now we're working on stuff we're excited about. As far as this hell year, the most important thing was to see each other around the table."

"We're no different than the rest of the world. 2020 turned everything on its head," adds Willingham. "We love to sit in the same room, and that is our goal. Not being able to do that was a challenge for us off the bat."

The World of Critical Role, available October 20, is a 300-plus page archive that is both collector's item for fans (affectionately called "Critters") and a codex for newcomers.

"We had an opportunity in this book to dive into things that might be new to the audience and provide a perspective that isn't available anywhere else," says Willingham.

"The book paints a picture of how our real journey building the company paralleled or juxtaposed the story," says O'Brien. Years ago, it was O'Brien's birthday that prompted the group to play Dungeons & Dragons for the first time. "Our real-life friendship and the friendships in the story are intertwined."

The book spans the years 2015 to 2019 for Critical Role. But 2020 is proving to be as historic for the group, whose egalitarian message "Don't forget to love each other" feels more urgent in a pandemic.

Just before its milestone 100th episode in March, lockdown kept the cast — Willingham, O'Brien, Marisha Ray, Laura Bailey, Ashley Johnson, Sam Riegel, Taliesin Jaffe, and their Dungeon Master, Matthew Mercer — from playing next to each other in the studio. The group spent months in quarantine figuring out how to continue, including virtually. Nothing seemed sufficient.

"It was insanely hard to wait, but it was definitely worth it," Willingham says. "There's an intangible difference being there in person and being online. I'm glad we did."

In June, Critical Role resumed its flagship show, a fantasy saga about a group of adventurers called the "Mighty Nein," with major changes to the set to observe physical distancing. The show also pivoted to pre-tape. "That one-hundredth episode had so much weight," O'Brien recalls. "We hadn't seen each other [in anything] other than Zoom in months. It's crazy it was episode 100 that sat there, waiting in the wings. We came back to go in a new direction."

In World of Critical Role, readers go deep behind the stream with hundreds of illustrations, profiles of the cast, ample trivia, and plentiful personal and professional photographs. Willingham describes it as a "yearbook" that brings clarity to Critical Role's past. "It's strange to look on decisions you made as a player," he says. "We remember what it felt in the moment. We had no idea what it might ripple into [for fans]."

In the early days, which World of Critical Role explores at length, the game was played privately. It went public in 2015 when actor and friend Felicia Day offered them a Thursday night time slot on the Geek & Sundry Twitch channel. At the time, livestreaming was new, and no one, the cast included, thought Dungeons & Dragons would appeal to a live viewer. An early idea was to play out boss fights in a video game, but the cast nixed it.

Willingham and O'Brien tell Inverse when it dawned on them Critical Role was a bigger deal than they realized.

For O'Brien, it was "when my wife stopped saying, 'Are you going again?'" In the beginning, they both shared the idea the show was "an experiment" or a "bowling night."

"My wife scratched her head. It wasn't what I went to school for. It was not the thing I spent the previous 15 years working on. But at some point, it was undeniable [this] had an incredible destination ahead of it."

That, "and the t-shirt selling out," O'Brien adds, referencing the first merchandise they sold and sold out of in two minutes.

Shortly after their Twitch debut, Willingham skipped a game to see Avengers: Age of Ultron in theaters. That won't happen again. Months later, the group went to Forbidden Planet in Manhattan during New York Comic Con for an appearance. There, they found "a line around the block."

"None of us were prepared," he says. "We went to New York Comic Con and they had a little stage for us because they figured our audience would be small. We didn't disagree." But they attracted so many people, it caused a fire hazard in the Javits Center. After their first sold-out live show in Los Angeles, the group realized how much attention they drew — and what exactly they had stumbled upon.

In 2018, Critical Role began a split from Legendary, the corporate owners of Geek & Sundry, and became fully independent in 2019. That same year, Critical Role again reached new heights when they raised one million dollars in an hour on Kickstarter for an animated special, The Legend of Vox Machina, a prequel to their first adventure.

"It's like going for a land speed record," Willingham says. "It's a vehicle going faster. As it's going, the adrenaline is building, there's this fear. 'Are we going to crash and burn?' Inevitably, the answer is no. We've been able to build a team that helps us take on evolution. Critical Role has evolved into something that has taken up the lion's share of our daily lives, in this fantastic way we are insanely grateful for."

A collaboration with animation studio Titmouse (Big Mouth, Metalocalypse, The Venture Bros), the original goal was $750,000 for a single animated special. But after raising a total of $11.3 million, a figure 15 times that amount, the project — the most successful film and television project in Kickstarter history — was expanded to ten episodes. In November, retail giant Amazon scooped The Legend of Vox Machina as a Prime Video streaming exclusive and ordered an additional 14 episodes.

Suddenly, a single animated special was now a series guaranteed for two seasons.

Originally set to premiere this fall, the Covid-19 pandemic pushed the series to an unspecified date. Willingham says production is ongoing and "is firing on all cylinders"; Vox Machina is yet another animated production to endure while live-action shows face costly delays, or worse, cancellation.

"There was still a significant challenge in adapting," Willingham says. "Titmouse rose to the occasion. But things are moving along, we see more and more every day that absolutely blows our minds."

With the first five years of Critical Role now contained in a definitive book, there is as much fondness and appreciation for the past as there is excitement for the future.

"What happened here is something extremely rare and beautiful," says O'Brien. "We can't comprehend this happened. The book captures that sort of Alice in Wonderland feel, recollecting how crazy it was to see this spring around us."

"It’s amazing to look back five years and see how far we’ve come," says Willingham. "Imagine what the next five years will hold. Let’s call it Volume Two."

The World of Critical Role is available now for pre-order and will be released on October 20.