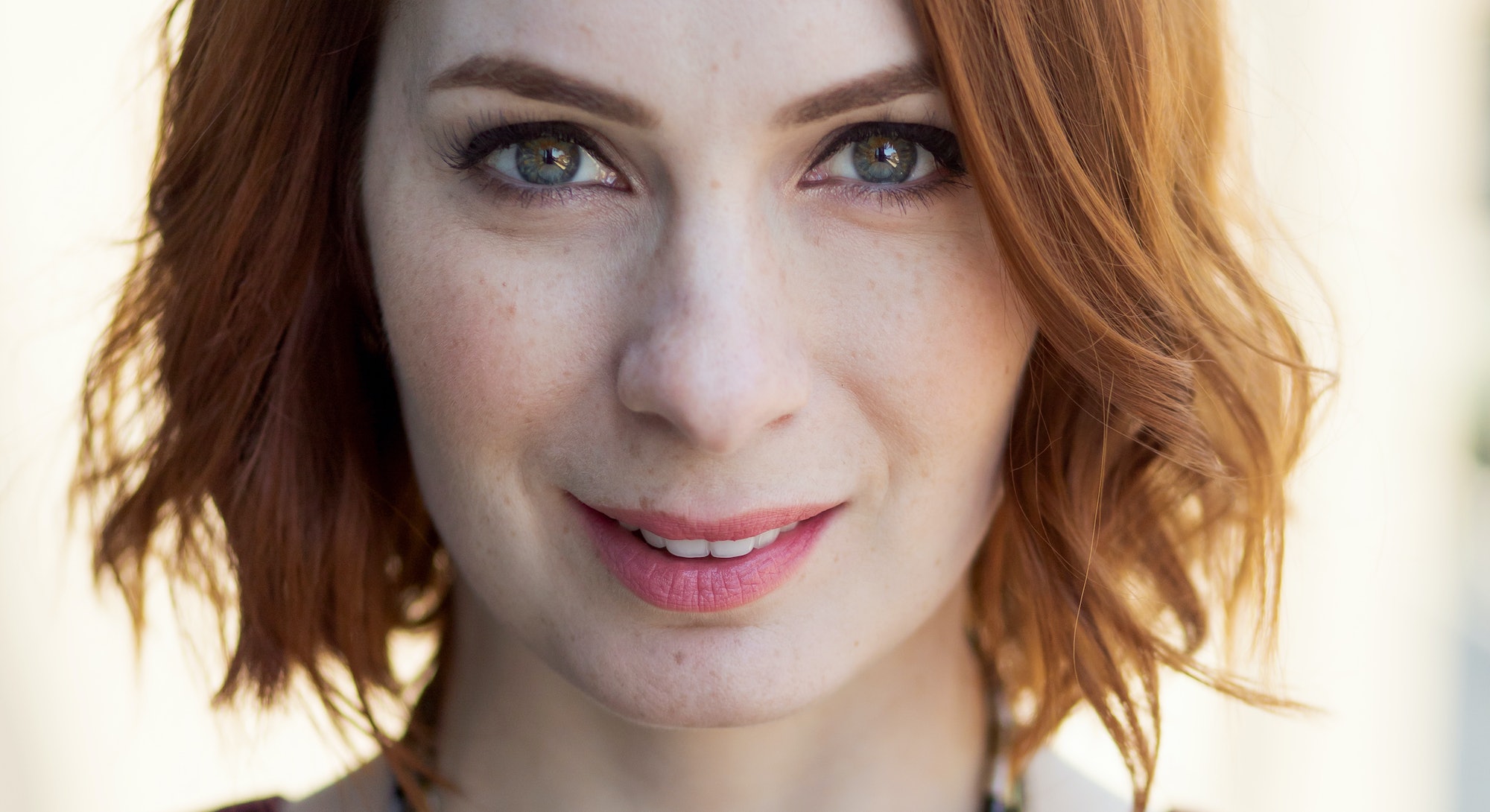 Google search Felicia Day — actor, producer, author of the new self-help book Embrace Your Weird — and you’ll find a few recurring key words: “geek goddess,” “Queen of the Geeks,” “Queen of Comic-Con.” It’s all very flattering, but to Day, being royalty only means waiting for the guillotine to drop.

“I never felt comfortable being anointed queen, because a revolution can quickly topple one,” Day tells Inverse. “There’s an implication that I was better than everybody else. The appeal of my career was that I was just one of everybody. ‘One of us’ was the chant at conventions I felt more comfortable with. I’m not better than anyone else; I just want to be creative around things I love. I just have a knack for making stuff happen.”

In the 2000s, Day rose to fame as the force behind The Guild, a web sitcom about eccentric adults addicted to an online fantasy game. The show’s popularity led Day to create Geek & Sundry, one of the first professional YouTube channels of high-quality content for niche enthusiasts. Its biggest hits include TableTop, a board game show hosted by Wil Wheaton, and Critical Role, where professional voice actors play Dungeons & Dragons. In 2012, Forbes wrote that the studio “could help blaze a trail for the future of network television.”

Seven years and two acquisitions later (first by Legendary in 2014, which itself was acquired by Chinese company Wanda Group in 2016), Geek & Sundry is still making stuff, but in a hotly contested ecosystem that includes Netflix, Hulu, Amazon, and soon, NBC, HBO, Disney, and Apple. Not to mention other professional YouTube channels with deep pockets and ravenous followings.

And Geek & Sundry is without Day, its founder, who grew fatigued in a less creative, more managerial role in the company. She left in 2016.

“I gave it my heart and my soul,” she says. “When I realized I had given as much as I could, I needed to move on.”

With her new book available October 1 and Season 2 of the improv comedy podcast Voyage to the Stars streaming now on Earwolf, Day talks to Inverse about returning to her creative space that inspired the internet to crown her geek royalty, to her own reluctance.

"Creativity is a necessary expression of self, and the most important thing is how we impact other people.

I did start it up again. I don’t have the time to play like I used to. When I logged on, it was like, Oh no, I can’t play four hours a night anymore. It was a cold splash of water. But the nostalgia factor was strong. I had a bunch of fans online, and we created a guild called “The Guild,” and it was fun to play with people online again.

In your new book, Embrace Your Weird, you encourage people to draw, sketch, basically vandalize your book in the name of creativity. What did you hope that would do for your readers?

There’s studies of education for kids where, if you interact and physically do something around something you’re learning, the way you think about something [becomes] stronger. I wanted to incorporate that into the book, as well as have an interactive dialogue with my audience. That’s what I do online, that’s what fuels me as an artist, and I wanted to put that essence into a book.

You published a memoir where you were honest about your mental health in 2015. Now, you have a self-help book for creative types. What did you learn in the last four years that encouraged you to help people?

Seeing the impact of my memoir on people. How being truthful and honest with your flaws can help other people was a huge motivation for this book. I feel like we get myopic when we look at ourselves and our creativity from our point of view. Like, it’s a value judgment on ourselves, how “good” or “bad” our creativity is. Creativity is a necessary expression of self, and the most important thing is how we impact other people.

Weeks ago, I saw a woman tweet about a video I did in 2012 where I learned crotchet. Just watching that video affected her; she started crocheting and now she has an Etsy shop and does crotchet for YouTube. An inadvertent curiosity on my part impacted someone’s life in a big way. That’s why its necessary we get over ourselves when we’re so inhibited to create, because it’s not about ourselves. It’s the way we impact others.

In what ways did The Guild and Geek & Sundry influence the way you understand creativity as you outline in your book?

My whole career has been a trial by fire. I wasn’t prepared or trained for any of the success or failures in my life. And yet that experience of getting back up again, after having roadblocks, has made me a better person and a better creator. Being able to jump in with vision and not knowing exactly how to actualize it, but being brave enough to try is inherent in the DIY mentality. I believe it brings out the best in people. When we’re handed success, we don’t appreciate it or feel like we’ve earned it deep down inside.

It’s a conflicted thing for me. I left the company after I had a baby, and I realized I couldn’t have two babies and be good at either of them. I spent five, six years at the company. I gave it my heart and my soul. I realized I had given as much as I could, and I needed to move on.

It’s a very bittersweet thing. I did love it so much, but I wasn’t being as creative under the circumstances of the company as I would have been happy being. I always look at it with fondness, and I do hope it keeps making things, because having independent geek voices is very important in this world. I hope to do that same thing in venues where I’m more creatively involved.

Critical Role is perhaps the biggest show to come out of Geek & Sundry. How do you feel about its current success? Do you feel like you played a part in that happening?

Anybody’s success is based on merit, and the success of that group is because of the chemistry between the actors and the brilliance of Matt Mercer. I don’t know if Critical Role would exist today without my idea of putting them on a livestream, but giving somebody an opportunity is not the same as claiming credit. I was able to give them a platform, but really, it was their talent that took them to the sky. I’m just happy I got to give people opportunities they wouldn’t have otherwise and take a leap.

Voyage to the Stars, a sci-fi improv podcast and your current project, looks like a creative homecoming for you.

One-hundred percent. It lets me spread my wings. I loved my company, but I became a behind the scenes person. Being one of the main characters in this is fun. I play Elsa, a quirky, know-it-all heiress, and it is the chemistry of the cast that gets me coming back every time we record. It’s funny and spontaneous and taps that geeky audience that I want to share with everyone.

The creator, Ryan Copple, is one of my oldest friends. He actually ran my company for awhile before he left to do his own things. This is us coming together again as a team to make things again, which has been a joy. Collaborating with my friends has been why I did anything. It’s why I did The Guild; it’s why I did Geek & Sundry. That spirit of play and having freedom is that spontaneous feeling I want in everything I do going forward.

How does recording an improv podcast work? I’m imagining sitting around tables with microphones making jokes, but how does a season have structure?

Yeah, we sit around a table with microphones. We have outlines, we have story points to hit, but everything else is made up. It’s like improv on a stage. We surprise ourselves, we make a game trying to crack each other up. But out of that is running jokes, story points. It’s a collaborative environment where you feel safe because you know where you’re supposed to end up in the end.

For every 30 minutes there’s maybe two hours worth of content. It’s a crazy proportion of stuff that ends up on the cutting room floor. It’s similar to making movies, just audio. When Earwolf locks the audio, they do the post-production sound that brings the audio to life.

How do you feel about those old labels you used to get, like “Geek Queen”?

I’m fine with getting rid of any label. Geek culture is mainstream, but I don’t know if the essence of the geek culture I love is mainstream. The superficials like superheroes are mainstream, but the spirit of outsiderness and rapscallions, that’s the heart of stuff I’ve done. Stuff that’s subversive and gives people a voice that don’t have a way to express themselves.

I can be a grand duchess, that’s fine.

You sold a show, Woman World, for Freeform. How is that coming along? In what ways are you applying the lessons of your own book to this show?

I sold a show! This year I locked down doing television. I’m pitching a lot of TV. I’m on a couple projects I can’t talk about. But Woman World, we are in the development process now, working on the script.

[Creator] Aminder Dhaliwal is an amazing animator, writer. She wrote this graphic novel I fell in love with, so we took it out as a TV show and sold it to Freeform. I’m thrilled to be a shepherd for her creativity.

Producing television is analogous to why I wrote this book. Shepherding other people’s creativity, helping them shape it with the experience I have, is rewarding to me. My job as producer is to bring out the best in her and make the best show we can together. That’s the same thing I want from my book. I want people to overcome hurdles that stood in front of me for years but didn’t have the tools to get over. I’m hoping people who read my book spend time cultivating their creativity and doing it for the sake of doing it. It’s truly the most fulfilling thing to express yourself in a way only you can.

I know you’ve been doing improv with your old Guild castmates again. Is there talk of a revival in 2019?