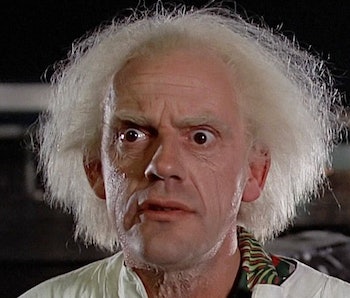 Time travel isn’t what it used to be. Or rather, in Amazon’s Outer Range, the biggest question about time travel in all of science fiction is given a more primordial spin.

At the risk of being reductive, time travel stories tend to present two ways characters can travel through time: via technology (like in Back to the Future) or through some kind of naturally occurring time travel. Outer Range is the latter, which makes it more unhinged than Back to the Future because when there’s no time machine, characters have less control. And that’s when things get interesting. (Mild spoilers ahead for Outer Range through Episode 6, “The Family.”)

Dune and Outer Range: The Soil Must Flow

In Outer Range Episode 5, “The Soil,” we learn that some of the dirt on the Abbotts’ land has the ability to create mild time travel or at the very least, time travel visions. In the final moments of the episode, Royal (Josh Brolin) witnesses what seems to be his own demise after rubbing some of the mysterious black soil on his hands.

To be clear, this is not a new science fiction concept. In fact, you could argue that Josh Brolin is very familiar with this kind of prescience because it’s not too different from what happens to Paul Atreides in Dune. The entire narrative of the first two Dune books is connected to the idea that Paul is basically controlled by his own fate thanks to visions that have been boosted by the Spice. In Outer Range, Royal’s future visions are caused by the Soil. While it’s not clear if this is an intentional homage to Dune, there’s a singular similarity that puts Outer Range in a very different genre than time machine-centric stories like Back to the Future.

In other words, the manipulation of time in Outer Range is thanks to some kind of natural resource, rather than technological innovation.

Time travel without a DeLorean

It’s very hard to create convincing space travel narratives without spacecraft of some kind. But time travel is different because you don’t always need a time machine. In stories like The Time Traveler’s Wife, time travel just kind of happens to a person, causing them to appear and disappear randomly. Then you’ve got time portals like the Guardian of Forever in Star Trek, which splits the difference between being a force-of-nature and a piece of tech created by ancient aliens.

The notion of a time machine — like Doc’s DeLorean in Back to the Future or the titular subject of the famous H.G. Wells novel — cuts through a story in a way that oddly limits the options of the storytelling. Once you’ve got a character like Doc punching dates into a control panel — or the Doctor, throwing the lever back and forth on the TARDIS — the time traveler often becomes the most important character in the story.

This is, of course, awesome, but it also oddly makes the awesomeness of time travel somewhat commonplace. When a character can control popping back and forth in time, the disorienting feeling time travel would likely create in reality is somewhat diminished. Arguably, this is why in early Doctor Who, the Doctor wasn’t always able to control the time-space destination of the TARDIS. Similarly, this is why the DeLorean is a broken time machine in all three Back to the Future movies. If you can travel through time with impunity and suddenly game the system, the narrative is in danger of losing relatable stakes.

One of the reasons that the tension is so high in Episode 6, “The Family,” is because Autumn knows there is a lot of this soil on Royal’s land. And Royal doesn’t want to believe it because that would mean he’s locked into his own fate.

Again, this is shades of Dune, and pretty much the opposite of Back to the Future. To be clear, there are plenty of sci-fi novels and short stories that touch on similar ways of looking at time travel. But Outer Range has brought this slightly scarier form of time travel to screen in a way science fiction has never really managed before.

If you could mine time travel and clairvoyance, and bottle it up like Autumn’s necklace, people would go nuts. And if there was a specific place in the world where “soil” like this could be found, you can imagine how that would mess up people’s lives. In this way, Outer Range has turned time travel into a natural resource, one that’s even more valuable and contentious than oil or water.

If the nature of how we see our lives was suddenly something you could hold, it would seem the definition of life would drastically change. What makes Outer Range so cool is that you can feel Royal processing this shift, and it scares the hell out of him.

Outer Range airs its final two episodes on Amazon Prime Video on May 6, 2022.