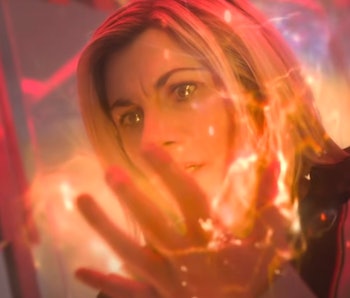 We don’t know if Jodie Whittaker’s Doctor will utter a tearful farewell like David Tennant’s infamous “I don’t want to go” when she regenerates, but no matter what happens her beloved 13th Doctor is departing very soon. After the conclusion of Doctor Who: Legend of the Sea Devils on Easter 2022, the world got its first glimpse of the beginning of the end of the Whittaker era. Here’s when to expect the regeneration, who’s back for her final adventure, and why we’ll see the new Doctor’s face months before the episode airs. Possible spoilers ahead.

After a touching and tightly-plotted episode called Legend of the Sea Devils, the BBC released a trailer for the last regular adventure of Jodie Whittaker’s Doctor. Though this special doesn’t have a title yet, we now know it will feature the return of the following Doctor Who characters:

In the finale of Season 13, the Doctor was warned by an all-powerful character named “Time” who said, “Your time is heading to its end... nothing is forever, no regeneration, no life.” In the new trailer for the big finale, the Master says something similar: “This is the day you die.”

The Doctor is also in possession of a fob watch that contains the memories of previously unknown versions of their past selves. Could that hold the key to the Doctor’s salvation?

What’s the release date for Jodie Whittaker's Doctor Who finale?

So, when exactly does the last episode of Jodie Whittaker’s Doctor Who air? Previously, the BBC has only confirmed that this special — which also celebrates 100 years of the BBC — will air sometime in Fall 2022. But beyond that general timeframe, we don’t know.

We also don’t know what this special is titled, or how long it is.

Who is the next Doctor Who after Jodie Whittaker?

Jodie Whittaker is the 13th Doctor, even though there are several incarnations that take place outside of that order (such as John Hurt’s War Doctor and Jo Martin’s Fugitive Doctor). Who will play the 14th Doctor? According to the BBC, the answer to that question will be revealed “in the coming weeks,” well before Jodie Whittaker’s last episode airs.

So we’ll see the face of the 14th Doctor before Fall 2022. With Russel T. Davies returning as the showrunner of Doctor Who for the first time since his departure in 2010, rumors have been circulating that a big name actor (maybe Hugh Grant) could become the 14th Time Lord. Fans have also speculated that Jo Grant’s previously unseen Fugitive Doctor, first introduced in 2020, could become the incumbent Doctor.

While it might seem like a giant spoiler that we’d know about the next Doctor before the current one regenerates, this has been the tradition in the modern era of Who. Fans were well aware of Matt Smith before David Tennant regenerated in 2010. Peter Capaldi’s Doctor was announced well before his famous eyebrows were glimpsed in 2013’s “The Day of the Doctor.” And Jodie Whittaker was revealed as Capaldi’s successor in July 2017, well before his swan song in “Twice Upon a Time” that same December.

So, if you don’t want to be spoiled by the face of the next Doctor Who actor, it’s probably best to avoid all news of any kind between now and the Fall. Good luck!

Doctor Who airs on BBC America and streams on AMC+.

More like this
Entertainment
Jan. 13, 2023
Foundation Season 2 could fix the worst thing about the Isaac Asimov books
By Ryan Britt
Culture
5 hours ago
29 years ago, one pivotal sci-fi series got a second chance
By Ryan Britt
Entertainment
Jan. 21, 2023
The Last of Us is the exception to the video game curse, not the cure
By Joe Allen
Related Tags
Share: