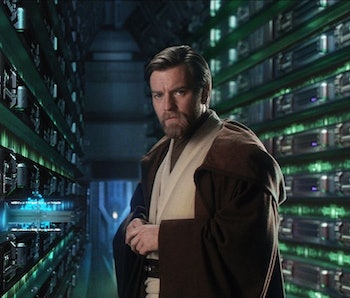 Ewan McGregor joined Kathleen Kennedy onstage at D23 in 2019 to officially announce the Obi-Wan Kenobi Disney+, but the show has hit several speed bumps on the way toward production. Even before the coronavirus pandemic shut down movie and TV productions around the world, the Star Wars series was dealing with its own internal setbacks.

However, one thing hasn't changed, and Ewan McGregor is still onboard to play the beloved Jedi Master. Having kept the show a secret for so long, the actor opened up to Men’s Journal about the Disney+ series — which had been in the works for quite a while. Remember back when McGregor was tired of all the Obi-Wan spinoff questions? Oh, how the times have changed. He described finally being able to discuss the show as a “massive relief” because “for four years, I’ve been having to lie to people about it.”

Details about the series remain scarce at this point. Still, we’ve compiled everything we know so far about the Obi-Wan Kenobi Disney+ series below, including plot details, cast information, and more.

What is the title of the Obi-Wan Kenobi Disney+ series?

The title is Obi-Wan Kenobi. Short and simple!

When will Obi-Wan Kenobi premiere on Disney+?

In April 2021, The Hollywood Reporter confirmed that Obi-Wan Kenobi would premiere in 2022. Unfortunately, we have yet to get a day or even a month of air. But it’s safe to say the series will air between other live-action series The Book of Boba Fett and The Mandalorian Season 3.

Is there a behind-the-scenes video for Obi-Wan?

Yes! Disney unveiled a behind-the-scenes video for Obi-Wan on its 2021 Disney Plus Day.

Why was production for Obi-Wan delayed?

Collider reported exclusively in late January that production on Obi-Wan had been put on hold (Collider's report was later backed up by The Hollywood Reporter). According to two independent sources who spoke to Collider, the crew assembled at Pinewood Studios in London was sent home indefinitely in January. It was also reported that Lucasfilm head Kathleen Kennedy was not happy with the scripts being turned in by screenwriter Hossein Amini. In THR's report, a source shared the Obi-Wan scripts "treaded similar ground as The Mandalorian, seeing the Jedi master lending a protective hand to a young Luke and perhaps even a young Leia."

McGregor commented on the Obi-Wan production delay just one day after the news broke. In a statement to the Associated Press (via Entertainment Weekly), the actor shared,

"It’s not been put on hold, it’s just been pushed back a little bit. The scripts are excellent and they just want them to be better. So we just pushed it back, but it’s not — it very dramatic, it would seem, online, there’s all kinds of shit online about it, but it’s only just slid back a bit. We’re still shooting it, I think it will still be aired when it was meant to be and I’m really excited about it. It’ll be fun to play again."

He also elaborated on these sentiments while speaking with IGN and teased a new filming start date:

"Now that Episode IX [Star Wars: The Rise of Skywalker] came out and everyone at Lucasfilm has got more time to spend on the writing, they felt they wanted more time to write the episodes. I’ve read about 80, 90 percent of what they’ve written so far, and it’s really, really good. Instead of shooting this August, they just want to start shooting in January, that’s all. Nothing more dramatic than that."

All that said, it may be a bit more dramatic than initially expected. A recent update from Variety confirmed that Amini was officially let go from Obi-Wan and has been replaced by writer Joby Harold, who's best known for having written Zack Snyder's highly anticipated film, Army of the Dead. Filming finally began in the spring of 2021.

Who is in the Obi-Wan Kenobi cast?

Obviously, Ewan McGregor is reprising his titular role as Obi-Wan Kenobi. Kathleen Kennedy also shockingly revealed in 2020 that Hayden Christiansen would be returning to the lightsaber as Anakin Skywalker (who at the point of the series was on his way to becoming Darth Vader).

How many episodes will Obi-Wan Kenobi have?

Is there a trailer for Obi-Wan Kenobi?

There is no trailer for Obi-Wan Kenobi, as the series is still filming. Once the show wraps, we should get footage from it. In the meantime, Disney+ has tons of Star Wars movies and TV shows you can content yourself with, including the Skywalker saga prequel trilogy starring McGregor as Obi-Wan Kenobi.

What is the plot of Obi-Wan Kenobi?

According to an announcement from Lucasfilm, Obi-Wan Kenobi will take place ten years after the events of Revenge of the Sith. The series will begin with Obi-Wan watching over a young Luke Skywalker on Tatooine, which is where we find him at the start of Episode IV. But these six episodes should take us on a “rollicking adventure” as the Jedi tries to negotiate a universe post-Order 66.

Obi-Wan Kenobi will premiere in 2022 on Disney+.