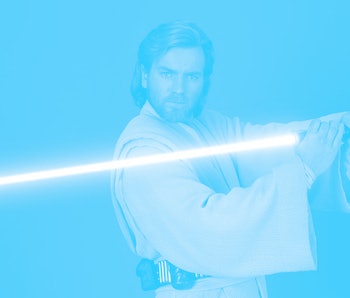 Devastating news reached our planet from a galaxy far, far away Thursday evening when Collider reported that the upcoming Disney+ series starring Ewan McGregor as Obi-Wan Kenobi has been put on hold indefinitely. But in a quick turn of events, McGregor himself claims that the show is still on track despite some production delays.

Collider's original report claims that a crew had assembled at Pinewood Studios in London but was sent home "indefinitely" because "Obi-Wan producer Kathleen Kennedy was not happy with the scripts." A similar report from The Hollywood Reporter claims the scripts were too similar to The Mandalorian.

"One source said the Kenobi story trod similar ground as The Mandalorian, seeing the Jedi master lending a protective hand to a young Luke and possibly even a young Leia, perhaps mirroring how the Mandalorian took Baby Yoda under his protective custody," THR reported, noting that the show had been reduced from six to four episodes and that scripts for only two episodes had been written thus far. At this point, it sounds like both of those scripts were scrapped.

Both IGN and Entertainment Tonight, however, spoke to McGregor at a promotional event on Thursday night for the upcoming Birds of Prey, in which he plays a villain, and the actor offered some words of reassurance.

"The scripts are really, really good. They want to make them better," he told ET. "And they just slid the production to shooting next year."

McGregor called the recent news "not as dramatic as it sounds" and said the show would be "airing on the same day and all that stuff," meaning that the previously unconfirmed, unannounced 2021 release date would remain the same as originally intended. It's merely the production schedule that has been changed.

"Instead of shooting this August, they just want to start shooting in January, that's all," McGregor told IGN, which means the crew that was assembled and then dissolved was mostly just working on pre-production. This does mean that the series won't actually begin production for about another year. "I think now that Episode IX came out and everyone at Lucasfilm's got more time to spend on the writing, they felt like they wanted more time to spend on the writing." It's possible that despite the success of The Mandalorian, after critics panned The Rise of Skywalker, Lucasfilm is concerned about the overall quality of the Star Wars stories being created.

Disney has not officially commented on the recent developments, but to the best of anyone's knowledge, Ewan McGregor remains attached to star with Deborah Chow as showrunner and Drive screenwriter Hossein Amini writing. The series is said to take place about eight years after the prequel trilogy, making it set roughly 10 years before the original trilogy at a time when Obi-Wan is going by "Ben" Kenobi on the planet Tatooine. Some or all of these details are still subject to change.

Interestingly enough, this news comes two short weeks after rumors emerged that the widely hated Jar Jar Binks would return to Star Wars via the Obi-Wan show. Was the annoying Gungan the main problem with these early scripts? Weesa can't know for sure!

Obi-Wan will be released on Disney+ sometime in 2021.