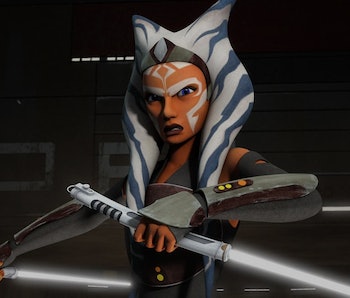 The Mandalorian just wrapped up its first season a few weeks ago, but speculation about what the future holds for the mysterious bounty hunter and his tiny green pal is already running rampant. Actor Rosario Dawson added fuel to the fire over the weekend by retweeting a fan’s suggestion she’d be a perfect fit for the role of a grown-up Ashoka Tano.

Star Wars fan and EmergencyAwesome YouTuber Charlie Schneider pointed out that Ahsoka would be in their early forties when Season 2 of The Mandalorian takes place, just like Dawson.

Ahsoka is one of the best-known Star Wars characters to never appeared on the big screen. She was Anakin’s teenage padawan in the Clone Wars animated series, who later becomes disillusioned with the Jedi Council and leaves the Order in Season 5. Her story picks up 14 years later in Rebels, when she’s appalled to learn that her former mentor has become Darth Vader. With the Skywalker saga now over, Ahsoka could be a contender for the franchise’s next leading hero.

This isn’t the first time Dawson has expressed interest in the part. Back in April 2017, she told Good Morning America about the online fan campaign for her to play the part, which she said would be “amazing.” She’s also tweeted about the role before, notably on Star Wars Day in 2017.

While Ashoka’s been a hugely popular character among Clone Wars fans for years, Rise of Skywalker served up a first taste of the character in live-action… well, sort of. The character, voiced by Ashley Eckstein, spoke to Rey during a climactic scene toward the end of the movie. The scene prompted Star Wars fans to wonder if Mando co-showrunner Dave Filoni — who created Ahsoka along with George Lucas — will bring the character to Disney+ series.

Ahsoka’s clearly been on Filoni’s mind recently. Shortly after the release of The Rise of Skywalker, he tweeted an eye-catching drawing that referenced the character’s Force ghost cameo and seemed to confirm her continued importance in the Star Wars universe. She’s accompanied by Gandalf from Lord of the Rings, a character who famously seemed to have died, only to come back stronger than ever.

While the end of Rebels had left her fate ambigious, we know Ahsoka will appear in the final season of Clone Wars, set to premiere on Disney+ on February 17. Ahsoka indeed lives — who’s to say she doesn’t make it to her forties?

Imaginary casting is nothing new for Star Wars fans, but it’s pretty rare for the actors themselves to weigh in. Now that her boyfriend Cory Booker has just dropped out of the 2020 presidential race, Dawson’s not at risk of being First Lady any time soon. Becoming one of the most kick-ass heroes Star Wars has ever known wouldn’t be a bad consolation prize.

The Mandalorian Season 2 comes to Disney+ in fall 2020.