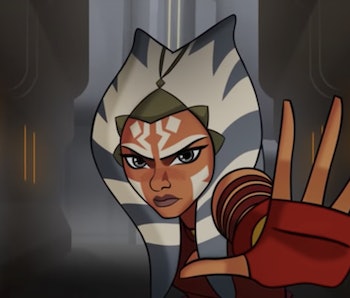 Fans may never know for sure if Ahsoka Tano survived her duel with Darth Vader in Star Wars Rebels, but in just 24 hours two new details about Anakin Skywalker’s former Jedi Padawan past have surfaced.

On Thursday, the latest installment of Star Wars: Forces of Destiny gave a brief glimpse into happier times between Anakin and Ahsoka. Before Ahsoka Tano’s Jedi master turned into a genocidal crazy person named Darth Vader, he used to lovingly call her “Snips.” In the Forces of Destiny episode, we find Ahsoka on her way to a little ceremony with Master Yoda and Anakin. She gets side-tracked to save a mother and baby from a robot that somehow escaped the world of RoboCop and found its way into this Star Wars cartoon. Seriously, if this robot had guns instead of claws, we’d be worried that OmniCorp was operating on the planet Coruscant. Then again, Anakin/Vader basically ends up like an evil RoboCop, so maybe that’s not too far off.

Meanwhile, Star Wars Rebels and Star Wars: The Clone Wars producer Dave Filoni tweeted out unused dialogue from Ahsoka’s penultimate appearance in Star Wars. Apparently, just before her duel with Vader, Ahsoka hung out with the mysterious Force-being called the Bendu. In this dialogue exchange, the Bendu tells Ahsoka she will change forever. This seems to mean she will die in her duel with Vader, but the Bendu isn’t clear on that, either.

In fairness, the Bendu is basically the Cheshire Cat of new Star Wars canon. In his whimsical and wonderful Tom Baker voice, the Bendu is a source of endless riddles rather than any real answers. Meaning, this latest “revelation” from Filoni actually just creates slightly more confusion.

The fourth — and final — season of Star Wars Rebels, which may or may not feature Ahsoka, will debut this fall on Disney XD.