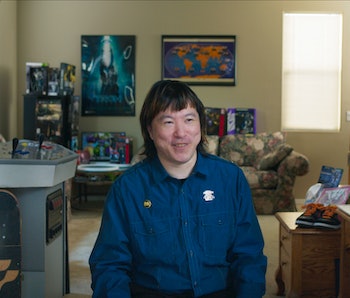 The history of video games is full of stories and people you've never heard before. Who created Space Invaders? Who was the first esports champion? What was the first game to include skin color? High Score, a new documentary series from Netflix and Great Big Story, explores the first era of gaming and zooms in on the moments that shaped today's billion-dollar industry.

But the most significant thing about High Score isn't just its accessible storytelling (with amusing 16-bit style re-enactments). It's that High Score brings an overdue spotlight to gaming's pioneers whose stories were almost lost to time. That many also come from marginalized backgrounds illustrates how much video games have always been made by — and played by — people of all colors and identities.

"There's no shortage of amazing stories when it comes to the people behind video games," series director France Costrel tells Inverse. "A lot of games were created in reaction to current events. As an art form, we used games to convey a bigger message."

“As an art form, we used games to convey a bigger message.”

"We wanted to be inclusive," says showrunner Melissa Wood. "Of course there are stories people know, like Nintendo and Sega, and we approach those with fresh eyes. But creating video games is so much more complex. We're not telling the A to Z of video games. We approach games more from the perspective of people who created the medium."

Streaming on August 19, High Score is a six-episode documentary series that fluidly traces the period of time Wood and Costrel deem to be the "Golden Age" of video games. It starts with 1978's Space Invaders and ends with the 1993 release of Doom. (Spacewar!, developed in 1962 and recognized as one of the first video games, gets a poetic moment in the final episode.)

Unlike movies and comic books, there is no formally recognized Golden Age of games. Arcade games, sure. But not all of gaming. "We acknowledge that's a subjective framework," Wood says. "For us, the 'Golden' era was the creation of this industry and how it burst onto the mainstream."

To Costrel, Doom, the popular (and violent) 3D action-horror shooter that popularized first-person perspectives, represented the biggest leap in the medium since the introduction of Pac-Man. This made Doom the logical endpoint for the series, at least for now.

"For the first time, players were asked to identify with the game," Costrel says. "You physically adopt the perspective of the game and step into the world. It was an evolution."

Ending High Score with Doom, now a major franchise that's sold over ten million copies, "launches us into the era we're in now," Wood says. "We're now in immersive worlds, connecting with each other and creating games ourselves. That felt as pivotal as the beginning, where everybody is playing Atari and arcades becoming this pop culture phenomenon."

But High Score is more than just a documentary full of answers for pub trivia. ("What Street Fighter game introduced Chun-Li?") The show brings attention to individuals who shaped, or simply participated, in gaming history.

"We found a lot of stories by chance," Wood says. The filmmakers stumbled upon Lawson's story while researching the arcade industry in Detroit. "We read a Black Enterprise magazine from 1981, and it had a profile of him we couldn't find anywhere else. We never heard of him, yet he is an important figure, and we have the platform to tell his story."

GayBlade, released in 1992, was the work of gay programmer Ryan Best. At the time, Best was living in San Francisco where he witnessed the AIDS epidemic ravage the LGBTQ community. As a form of catharsis, Best made a queer parody of fantasy PC games that swapped the genre's goblins and orcs for homophobic cops, TV evangelicals, and Republicans. Swords and axes were exchanged for purses, mace, and press-on nails.

GayBlade was a cult hit. But a moving mishap (detailed in the documentary) resulted in Best losing all traces of his creation — until now.

"After we filmed, somebody got in touch with Ryan," Wood says. "They heard about GayBlade through the Berlin Museum. We were able to get a copy. It took our post supervisor a long time to run it. We made her play for hours, screen capturing so we have something to show. Turns out it's a very challenging game. But the happy ending is that Ryan has the game."

The filmmakers acknowledge High Score can't cover all of gaming. It doesn't even include some of the filmmakers' own favorites, like SimCity, which the show's creators say might just turn up if they're given a second season.

"I love SimCity when it came out and I think Will Wright is a genius," says Wood. "I would love to pursue that story because it's an incredible series. I’d like to take another stab if we had another opportunity."

“It was difficult to limit the show to six episodes.”

But Wood and Costrel hope audiences of all levels, newbies and hardcore veterans, learn something new about their favorite pastime.

"It was difficult to limit the show to six episodes," Costrel says. "We could have made 40 hours. We had to choose stories we found interesting because of the people behind them. Not only creators but music composers, artists, painters, players. All played an important role in the history of gaming."

"There are so many amazing stories out there and not enough time to tell it all," Wood says. "We wanted the strongest stories and that included having a diverse perspective in the industry. That was as important as the stories themselves."