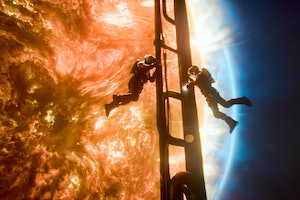 A banner year for Netflix, 2021 saw the streamer releasing more content than ever, constantly outdoing itself to the point where a sleeper hit like Squid Game became the most-watched Netflix Original ever. In the last month of the year, Netflix is not intending to stop any time soon, combining a jam-packed holiday slate with enough crowd-pleasing thrillers to keep the whole family entertained.

Here’s everything you need to add to your Netflix streaming queue this December.

There’s nothing rarer than a third season for a Netflix show, as the streaming service loves to cut shows off after two. But this sci-fi reboot has proved its worth as a wild space opera adding some credibility to a title that previously was only associated with a less-than-stellar 1960s sitcom and 1998 movie.

In this third season of Lost in Space releasing on December 1, a limited amount of episodes offer something that’s rarely found in series like this: a firm ending. For fans of Seasons 1 and 2, get ready for a finale that will leave you satisfied. If you’re a new fan, now’s the perfect time to sit down and appreciate this sci-fi saga from start to finish.

Time to toss yet another coin to your witcher. The mysterious medieval series starring Henry Cavill is finally coming back for a second season on December 17, two years after the release of Season 1. This time, expect more monsters, more magic, and more rip-roaring fantasy action with Netflix’s signature gritty tone.

What this season will cover is still a mystery, but it promises a more unified story now that the three huge storylines from Season 1 have finally converged. Hopefully, this means the characters we saw separate before will have even more tumultuous interactions within each grouping.

This highly-anticipated South Korean series is a good, old-fashioned mystery thriller and dystopian drama. Coming to Netflix on December 24, The Silent Sea is set in a dystopian world where humans have abandoned Earth. It follows a crew of scientists sent to collect a sample on the moon, but all is not what it seems.

With a coveted Christmas Eve release date, Netflix may be betting big on this as its next international smash hit. With an all-star cast, including frequent Park Chan-wook collaborator Bae Doona, boy band alum Lee Joon, and even Squid Game’s handsome, slap-happy salesman himself, Gong Yoo.

Sci-fi movies on Netflix in December 2021

Joseph Gordon-Levitt, Emily Blunt, and Bruce Willis all lend star power to this original time travel sci-fi story written and directed by polarizing Star Wars director Rian Johnson. Johnson, thankfully, has since proven his mettle as a writer-director with the hit whodunit Knives Out, but in 2012, Looper served has his first foray into mainstream filmmaking.

Coming to Netflix on December 1, Looper is a time capsule from a time before Disney’s two big franchises — Star Wars and Marvel — took over the sci-fi genre. Like many time travel movies, the ins and outs of the plot can get complicated, but it’s entertaining and a delightful reminder of what stories outside of IP are like.

Speaking of pre-Marvel sci-fi, Steven Spielberg’s Tom Cruise-starring actionfest Minority Report is also coming to Netflix on December 1. Roughly based on a short story, the film follows a future where a portion of law enforcement uses psychics to focus on “precrime,” stopping crimes before they even happen.

Though it sounds like a hokey Tom Cruise vehicle — thanks to its direction by Spielberg and its well-developed script — it’s a sci-fi story that’s remained relevant, and maybe even prescient, in today’s cyber-security-obsessed world, touching on themes of free will and privacy.

Minority Report isn’t the only precognition-based thriller coming to Netflix. Sandra Bullock stars in Premonition, a 2007 movie streaming on December 1. It follows a woman who experiences the days before her husband dies out of order, meaning she may just have a chance to save him before it’s too late.

This is Sandra Bullock in the role she was made for, a woman out of her depth but on a mission to save those she loves. It’s the ultimate psychological romance drama, with a shocking ending that will immediately make you want to rewind to the start.

The Fourth Kind, streaming on December 1, follows in a long tradition started by films like The Blair Witch Project and Paranormal Activity — the creepy mockumentary. However, while those films were overtly horror, this one is a full-fledged alien sci-fi thriller. Starring sci-fi maven Milla Jovovich, it follows one woman’s experiences with aliens, which she recounts in an interview.

While The Fourth Kind is a mockumentary, it uses an element that is infrequently used in fiction: the dramatic re-enactment. Within the world of the film, it’s a documentary that chooses to use actors to illustrate its action, making it a metatextual rich work for a sci-fi alien flick.

Tremors is one of those films where it’s rare to be casually aware of it. Either you know and love the cult horror-comedy thriller, or you have no idea what it is. Well, lucky for both groups, the movie is coming to Netflix on December 1 for those either curious about what the fuss is about or wanting to revisit the classic.

Tremors stars Kevin Bacon as a rural repairman thrust into an investigation of people mysteriously dying that seems to be caused by a terrifying monster under the Earth’s crust. This 1990 thriller is a classic creature feature that will fill out Netflix’s horror offerings.

For many schoolchildren, The Giver is the first sci-fi novel they encounter. Set in a future where everything is controlled by a governmental council, from population to vocation, one boy is given the precious task of remembering the memories of the people, passed down from generation to generation.

On December 15, the 2014 film adaptation of the novel will be available to stream, a family-friendly thriller starring Jeff Bridges and Meryl Streep. While it’s hard to capture the magic of Lois Lowry’s original book, it’s a loving tribute to a sci-fi classic.

Don’t Look Up, available to stream on December 24, is set to be Netflix’s last major movie release of the year. The film boasts a chock-full of A-List actors who bring huge star power to the leading roles, namely Leonardo DiCaprio and Jennifer Lawrence. Meryl Streep plays the President, Jonah Hill plays her son, Timotheé Chalamet plays a young man named Yule, and Ariana Grande plays (and sings as) a lightly fictionalized version of herself.

Written, directed, and produced by Adam McKay, best known for his comedy work (but also is an executive producer on Succession), Don’t Look Up will probably be the movie families across the world watch on Christmas morning, no matter how they celebrate.