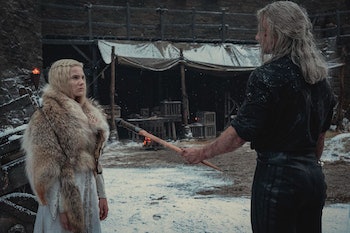 Netflix struck gold with The Witcher, an adaptation of the popular fantasy books and even more popular video games, when it premiered in December 2019. Two years later, the mutated monster hunter called Geralt of Rivia (Henry Cavill) will return for Season 2.

Here's everything we know about Netflix’s The Witcher Season 2, from release date and trailer to cast, plot, and more.

What is The Witcher about?

Like the hugely popular video game series of the same name, Netflix's show is based on a series of short stories and novels written by Polish fantasy author Andrzej Sapkowski. "Witchers" are an order of monster hunters exposed to mutagens that give them augmented magical abilities, but they also brew potions that enhance their physical attributes even further. Over time, the knowledge to create new Witchers was lost, so Geralt has become something of a legend by the time the series kicks off because he's one of the very last Witchers around.

For reasons that aren’t immediately revealed in Season 1, Geralt is bound to protect a young princess named Ciri (Freya Allan), but on his travels, he also becomes intimately connected with a sorceress named Yennefer (Anya Chalotra). Most of Season 1 follows these three separate plot threads before converging closer to the finale.

Shortly after its release, The Witcher outpaced even The Mandalorian in terms of sheer demand, and it become the biggest TV series in the world. There’s even data to suggest that it became more popular than even Stranger Things Season 3.

With the fate of the Continent hanging in the balance, Season 2 is sure to deliver on more epic stories

Has The Witcher been renewed for Season 2?

Variety reported in November 2019 — more than a month before Season 1 even hit the platform — that The Witcher had received a pre-emptive Season 2 renewal. That’s always a strong indication that Netflix has a lot of confidence in the series, and it’s with good reason.

Henry Cavill thanked fans for their support in a January 10, 2020 Instagram post and confirmed they were already working on Season 2. Production was halted in mid-March due to the coronavirus and didn't resume until mid-August. Filming officially wrapped on April 2, 2021.

When is The Witcher Season 2 release date?

True to the nature of The Witcher, Season 2 will be dropping on a cold winter day. At the virtual event “WitcherCon,” it was announced the series would be returning on December 17, 2021.

Is there a trailer for The Witcher Season 2?

Yes! Netflix gave their first tease of The Witcher Season 2 during the aforementioned “WitcherCon” back in July. You can view that teaser below.

But at the end of October, Netflix came out with a full trailer, which sets some new action and setpieces to Kanye West’s “Monster.”

How many episodes will The Witcher Season 2 have?

The Hollywood Reporter reported with the Season 2 renewal announcement in November 2019 that the second season would be eight episodes long, just like Season 1.

What are the episode titles for The Witcher Season 2?

Netflix revealed seven of the eight episode titles for The Witcher Season 2. They are:

The streaming service later confirmed outright that the first episode would be based on the Andrzej Sapkowski short story of the same name.

What is the plot of The Witcher Season 2?

In the aforementioned Reddit AMA, showrunner Lauren S. Hissrich confirmed that in Season 2, “the story will be much more linear now that the three characters’ stories have started to intersect.” In other comments, she implied we might “meet more Witchers” and explore the depth of the Nilfgaardian villains.

Season 1 loosely adapted two Witcher short story collections: The Last Wish and the Sword of Destiny. Based on where Season 1 ends, Season 2 should adapt the novel Blood of Elves.

In that story, Ciri becomes the target of political assassinations from Nilfgaard and other nations as well. Geralt takes her to Kaer Morhen, the castle kept by the order of Witchers. There, Geralt trains her with other Witchers, including the ancient Vesemir. The mage Triss (who seemed gravely injured in the Season 1 finale) also arrives and helps instruct Ciri in the use of magic.

Eventually, all of these characters, including Yennefer, form an unlikely adoptive family, with Yennefer and Geralt acting as parents and teachers to Ciri, whose immense magical power is unlike anyone else’s in existence.

Who is in The Witcher Season 2 cast?

The Witcher Season 2 has added some truly stellar actors into the mix. In February 2020, Deadline revealed Game of Thrones star Kristofer Hivju would appear in the upcoming season as Nivellen. Hivju's character confirms a popular Witcher tale will be woven into the Season 2 premiere episode focusing on Nivellen, a character cursed for the crimes he's committed in the past.

Later that month, it was announced Kim Bodnia would be joining the show as well. The Killing Eve star plays Vesemir, a charming relic of the witcher Golden Age. He is the oldest and most experienced Witcher in the series, as well as a father figure to Geralt

Additional new cast members include Yasen Atour (Young Wallander) as Coen and Paul Bullion (Peaky Blinders) as Lambert, both of whom are Witchers like Geralt. Thue Ersted Rasmussen (Fast and Furious 9) was originally cast as Eskel, however, Variety reported in late September that the role was recast due to "rescheduling conflicts caused by the coronavirus pandemic." Basil Eidenbenz will now play the role.

New castmembers also include Rebecca Hanssen as Queen Meve of Riva and Lyria; Aisha Fabienne Ross (The Danish Girl) as Lydia, who is Vilgefortz's assistant and personal secretary; and Agnes Bjorn as Vereena, a powerful vampire. There's also Mecia Simson as Francesca, presumably the elf queen and sorceress Francesca Findabair. Additionally, Kevin Doyle has been cast as Ba'Lian, a character who was created specifically for the series.

More like this
Entertainment
Sep. 26, 2022
Everything you need to know about HBO's The Last of Us TV series
By Corey Plante and Willa Rowe
Culture
Sep. 20, 2022
5 amazing sci-fi shows and movies leaving Netflix in September 2022
By Robin Bea
Culture
Sep. 16, 2022
You need to watch the best cult thriller of the year on Netflix ASAP
By Dais Johnston

This article was originally published on Jan. 13, 2019