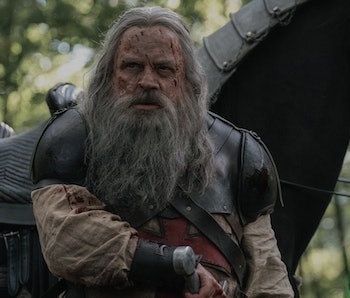 Everyone’s favorite internet dad, Mark Hamill, has no idea what The Witcher is, but he’s totally game to play a key character in Season 2 of Netflix’s action-fantasy show. If someone will let him. Please let him. Because Hamill would be perfect.

Netflix’s first eight-episode season, based on the book series by Polish writer Andrzej Sapkowski, was only just released on December 20, but Netflix ordered a second season back in November. One key character that could have a role to play in The Witcher Season 2 is Vesemir, an ancient Witcher and father figure to Geralt of Rivia that everybody thinks should be played by Luke Skywalker actor Mark Hamill — including Hamill himself.

The idea first came from a Twitter thread started by The Witcher showrunner Lauren Hissrich in 2018, where she described Vesemir as fatherly, wise, and sprightly. When a Star Wars fan account suggested Hamill, the actor agreed. “I have no idea what this is or what it’s about but agree it could/should be played by me,” he wrote.

One fan on the Witcher subreddit posted this exchange shortly after the series debuted, which led IGN to write a blog post about the tantalizing possibility.

Ever the active Twitter user, Mark Hamill noticed a tweet from IGN about the comment and doubled-down on his eagerness to give it a shot. “I still have no idea what this is or what it’s about, but I DO know they haven’t ever asked me to play Vesemir … yet,” he wrote.

According to TV Line, Season 2 won’t go into production until early 2020, so it still feels possible that Hamill might be cast. But he’ll have to do a lot of research into The Witcher to get there.

In the universe of The Witcher, Geralt of Rivia is one of the last Witchers, an order of knightly monster hunters who undergo a series of mutations that give them superhuman abilities and increased longevity. Witchers were once created and trained at the fortress Kaer Morhen, but during Season 1, Geralt mentions that Kaer Morhen was ransacked some time ago so no new Witchers can be created.

Based on lore from the games and books, the only old Witcher to survive the attack was Vesemir, the sole remaining resident of the castle. If that’s also the case in the timeline of the Netflix series, then it stands to reason that Geralt would take Ciri to Vesemir for training in Season 2, because that’s exactly what happens in the source material.

Under the tutelage of Geralt and Vesemir, Ciri is recognized as a Source thanks to her Elder Blood, which gives her uncanny access to magical power she often can’t control. Eventually, they recruit Yennefer to train her in the ways of sorcery. All of that sounds like an exciting arc for Season 2. Now all we need is Mark Hamill as Vesemir to help mentor her.

The Witcher Season 2 should be released sometime in early 2021.