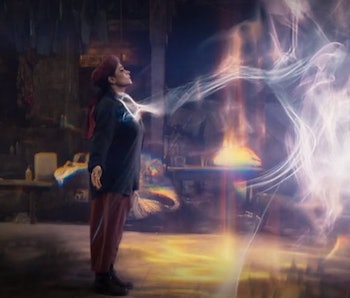 Najma, we hardly knew ya. Before Ms. Marvel viewers could learn more about The Clandestine leader’s motives, why she and her Djinn pals were banished from the Noor Dimension, and why getting home was more important than sticking with her half-human son, Najma died.

Her death in Episode 5, so abrupt that it teetered on anticlimactic, is one of the first times we’ve seen a Marvel movie or show slaughter the Big Bad before the hero even gets a chance to take a swing at them. Najma (Nimra Bucha) and the other Clandestines are pulverized by a mysterious mist that oozes out of the rift between the Noor Dimension and our world. What if, however, this fog and Terrigenesis from the comics are one and the same?

Marvel loyalists who watched Agents of S.H.I.E.L.D. or the dismal Inhumans series, read the comics, or played the Marvel’s Avengers game know all about Terrigen Mist and its relationship to Inhumans.

Terrigen Mist hasn’t had much of a role in the MCU thus far, however, as Marvel Studios hasn’t exactly found the best way to incorporate Inhumans, the X-Men, or any other mutants into the MCU fold. The closest we’ve come is the Black Bolt and Professor Xavier cameos in Doctor Strange in the Multiverse of Madness — and they both only last a few minutes.

Terrigen Mist is a vaporous, mutagenic substance that can alter the biology of people who possess a latent Inhuman gene. It can also restore the super abilities of depowered mutants (but only to a certain degree, before exposure becomes hazardous).

Terrigen Mist comes from Terrigen Crystals, which are a rare mineral created by the advanced militaristic blue-hued alien race, the Kree, who are prominent in both the Guardians of the Galaxy films and Captain Marvel. After Inhumans are exposed to Terrigen Mist, the Terrigenesis process begins. The first step is normally a cocoon metamorphosis, although in the comics, Kamala Khan lucked out and skipped this step.

Once completed, Terrigenesis can produce superbeings — or it can kill subjects who don’t possess the right genetic makeup.

Terrigen Mist is also persnickety: Once the mist began mixing with Earth’s atmosphere, it eventually turned toxic to mutantkind. The mutant plague was known as M-Pox caused not only massive casualties but also tension between the X-Men and the Inhumans.

Agents of S.H.I.E.L.D. fans noted an eerily similarity between the Terrigenesis of Daisy Johnson in the ABC show and whatever caused Najma’s death, as the crystals that engulf Najma just before her flesh dissipates look a lot like the cocooning depicted in Shield. However, while Daisy survives to become the Inhuman Quake, Najma is unable to handle the steam oozing from the Veil of Noor.

If they are the same, it would be an interesting but roundabout way for the MCU to retcon Inhuman origins in a way that fits best with established MCU characters and elements. Perhaps Ms. Marvel’s Season 1 finale will reveal that Kamala Khan’s (Imani Vellani) powers are both cosmic and Djinn, polymorphic and Inhuman, a combination of her comic book characterization and the show’s take on the teenage superhero.

However, introducing Inhumans to the MCU as a sort of clunky cross between humans, Djinn, and possibly also aliens may be far too confusing and cumbersome for the final episode of a standalone mini-series.

The simpler explanations for the Clandestine’s death, and Kamala and Kamran’s powers, may not be as satisfying for diehard fans of the comics or of Agents of S.H.I.E.L.D., but they may also be the only plot points that can fit in the tight limits imposed by a six-episode show.

Ms. Marvel is streaming on Disney+.