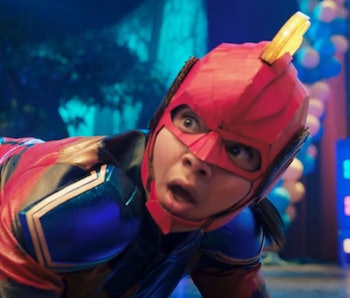 Marvel loves to be self-referential, and it’s only becoming easier as this cinematic universe keeps expanding. Take, for example, Hawkeye, which began its run with a bombastic Hamilton-style musical about Steve Rogers and the Battle of New York. Rogers: The Musical was an eerily accurate portrayal of the event, but how did those details become public knowledge? You may have missed it, but Ms. Marvel Episode 1 finally explained this conundrum in a hilariously creative way.

Episode 1 of Ms. Marvel began with a long monologue from Kamala Khan detailing why she loves Captain Marvel so much. She credits her knowledge to “my extensive research and my diligent studying of Scott Lang's podcast interviews” before explaining how Carol Danvers “sliced through Thanos’ fleet like a flaming angel.”

It’s a cute detail to establish our first fangirl superhero in the MCU, but it also does a lot to establish how the Avengers and the common folk communicate. If Scott Lang has a podcast where he interviews his fellow Avengers — or even just rambles to himself — it could establish a sort of oral history to take the place of the many, many movies we get to see as MCU fans.

Marc Shaiman, the composer behind Rogers: The Musical hinted at something similar in an interview with Inverse.

“Perhaps, even in things that we've never seen, members of the Avengers had actually given interviews about this or that,” he said.

Scott Lang’s podcast may not be the only one, either. The glimpse we got of the cover art for the podcast shows it’s called “Big Me Little Me: A Scott Lang Interview,” but the podcast itself seems to be part of the “This Powered Life” podcast network. Are there more podcasts out there? Does Bruce Banner host a mindfulness show? Does Dr. Strange offer call-in advice? The Marvel Podcast Network could be as sprawling as the MCU. Who knows what else could be revealed in the future.

The prospect of a Scott Lang interview show is exciting, but it finally answers all those lingering questions about how the average person learns just how the Earth is saved over and over again. Also, it explains why Ant-Man was randomly in Rogers: The Musical. If Scott’s in charge of the oral history, why wouldn’t he want to put himself in there?

We’ve only seen one episode of Ms. Marvel so far, but as an Avengers superfan, she’ll probably show just what her “extensive research” really means. How else have their adventures been chronicled — TV specials, non-fiction history books, documentaries? It’s truly an unprecedented opportunity to establish just how the events of Endgame went down, including the heroic sacrifice of Iron Man and Black Widow, who we see memorialized at AvengerCon.

Ms. Marvel has the opportunity to show just how the in-universe Marvel fan compares to the MCU fan. Half the experience is voraciously seeking out any information you can on just what happened, so Kamala can show just what that looks like in a world without the blockbuster movies and streaming shows.