“You don’t say no to Kevin Feige!” 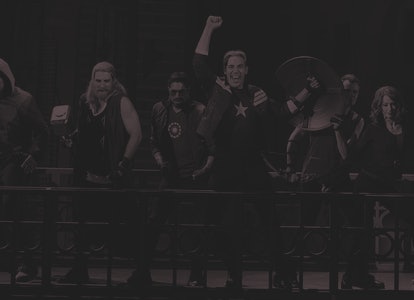 Hawkeye’s post-credits scene was unlike anything we’ve seen before. While Marvel normally teases the future, their latest series ended with a victory lap in a full encore performance of in-universe Broadway sensation Rogers: The Musical’s “Save the City.”

Many fans weren’t pleased with this prime spot looking backwards instead of forward, but the scene paradoxically did something new. After 20-odd teasers and reveals, the most surprising choice was not revealing anything at all. It also allowed the fabulous music and lyrics of Marc Shaiman and Scott Wittman to take center stage.

After making this argument in an article, I closed the book on Hawkeye. But on Christmas morning, I woke up to the best gift of all: encouragement in a Twitter DM from composer and co-lyricist Marc Shaiman himself, who agreed to an interview a few days later.

“I dangerously read just about everything,” Shaiman tells Inverse. “And so often it can be like, ‘oh, I wish I hadn't read that,’ or just getting facts wrong. But it was really nice to see someone completely understand the balls you have in the air with the juggling act.”

Shaiman and his co-lyricist Scott Wittman are Broadway legends, with Hairspray and Charlie and the Chocolate Factory among their many collaborations. But Hawkeye posed unique challenges: how do you create a show tune that fans would enjoy but Clint Barton would walk out of? How do you immortalize a classic Marvel moment in a silly but loving way? The answers involve a lot of lore, some speculation, and tons of encouragement from the brains behind Hawkeye.

Inverse: My first question is also my most nitpicky question. The big line in “Save the City” is “I can do this all day,” but how would the in-universe writers of Rogers: The Musical know about what was said if nobody was around?

Marc Shaiman: We talked about that with [Hawkeye showrunner] Rhys Thomas. We just figured in the universe, people writing a musical or writing a book or writing a magazine article would've done their due diligence and homework and interviewed people who had been there. Perhaps, even in things that we've never seen, members of the Avengers had actually given interviews about this or that.

“From Kevin Feige on down, they were like, ‘This is good.’”

There was a certain amount of liberty about that. Maybe Natasha in some interview on CNN might have said, “Oh, you know this guy, he's always like, ‘I could do this all day.’” It could have come up somehow. The same thing applies to including lyrics about getting some shawarma when we're done. I wrote these things and no one objected to them! But we did talk about that. And we just figured that they don't say these things in a total vacuum.

And you know how Marvel people are, you would’ve thought they would say “No, no, this isn’t possible.” But from Kevin Feige on down, they were like “This is good.”

So much of the Hawkeye cast can sing: Hailee Steinfeld was in Pitch Perfect 2, Fra Fee was in Les Misérables, Brian D’Arcy James is a Broadway legend. Would you be willing to help out with a full-on Once More With Feeling-style Marvel musical project?

Well, of course we would. I mean, it was really a one off. It was just there. It was an idea that almost came up as a joke one day and then they didn't let it go. It just kept coming up. But it was just to serve that one purpose of Hawkeye being in New York.

In the original script they sent us there was much more. There was a press agent who greeted him at the door and he was looking around saying, “Where's everybody else?” And she had to kind of tell him, “Well, you're the only one who actually has agreed to show up.” He felt funny also about that, that none of the other Avengers were there.

The hard part was writing a song that had to be something that Hawkeye or people who don't like musicals would roll their eyes at. It's been tough because we did our job well, and that means there are a lot of people who were like, what is this?

“It has been tough to know that by doing our job well, we made something that not everyone likes.”

I understand that there are a lot of people who would've expected and wanted the post-credits scene to be some new kernel of what's gonna happen next in the MCU. I completely get it. But it has been tough to know that by doing our job well, we made something that not everyone likes. It’s been bittersweet almost, but to be in the Marvel Cinematic Universe is crazy.

My husband is a huge Marvel person, Star Wars, everything. I would go to with him to all the Marvel movies and I would just take it all in. Then in the parking lot and when we got in the car, I'd say like, “So what?” and he would explain everything to me more like, “Well, this has happened there and ties into this movie.”

I've really ended up seeing almost all of them with him. So when this came about I thought this is just gonna blow his mind, and it did. And he was also in Hawkeye as “a mysterious man sitting behind Hawkeye in the audience.” They were very good about it. Basically every time Hawkeye is on camera in the audience, my husband Lou is right there behind him.

You’ve said before that the events of Rogers: The Musical begin with Steve’s backstory. What do you see the finale being? Does it end with Endgame?

We can only wonder! I would imagine the events of Endgame. The very moving ending and the romantic fact that he chose to grow old so that he could have his great love affair... it's beautiful. That would make a gorgeous musical.

Who decided to put Ant-Man in despite him not being present at the Battle of New York?

That came from Rhys and Marvel, as something to further aggravate Hawkeye as he watched the show, and also as a comment on how movies and articles and people always get something wrong.

I did some research into the source material for Echo and Hawkeye, and Echo actually has a theatrical connection in the Daredevil comics. She does a one woman show that's a combination of ballet and interpretive dance. Why do you think theater and superheroes work so well together?

The superhero world is extremely theatrical. First of all, they're putting on costumes in real life. So they're obviously very theatrically inclined. They're performative, if that's the right word. They truly perform. It makes complete sense that theatrical people would be attracted to the superheroes and they would make their way onto the stage and be portrayed in a musical.

It’s been fun to see the initial reaction, especially from all the musical theater nerds. And I say the word nerd with love. There were funny things on TikTok of like “me watching this number” and it's like, you know, they have a scowl and then it cuts to them in the bathroom singing. They couldn't help themselves.

“Save the City” was written amid health restrictions. Do you consider Rogers: the Musical a lockdown musical?

It did come from that, right as people were banging pots out the window at seven o'clock every night to thank the frontline workers. It was born of that. It was gonna exist one way or the other, because they'd written it into the script, but “Save the City” certainly took form because of that.

I wasn't inclined to write anything these last two years really. This was the biggest thing. I just wasn't inspired to go near the piano. I didn't mind not being inspired. I've worked a long, long time, and I'm perfectly happy to just say “You know what, let me see what retirement could be like.”

And then Kevin Feige shows up...

And nobody says no to Kevin Feige!

So WandaVision made MCU history for winning the Emmy for Outstanding Music and Lyrics with “Agatha All Along.” Do you think “Save the City” could be a contender next year?

I mean I hope so! “Agatha All Along” didn’t have that odd tightrope that we had of creating something that was intentionally something to be eye-rolled at by at least Hawkeye, you know? They got to just write a perfect one-minute-long thing. But I think we did a good job and I hope when things roll around, we might get a nomination, but you can't really think about that stuff.

What were the major influences for Rogers the Musical, aside from of course the aesthetic reference to Hamilton?

When we saw the set design, I did say to them, “Hey guys, I just wanna make sure you know we don't write in that style.” Clearly they would've gone to Lin Manuel first if they wanted him. So we wanted to make sure that we weren't going to write something and then have them be like, “Well, this isn't like Hamilton.”

It's just the bridge, it’s very similar. And the fact that the bridge is something that existed in Hamilton, it's just a theatrical device. In “Save the City” it's because it actually took place in and around that bridge, a literal bridge. We wrote more in that kind of just like a basic Broadway pop gospel rock-and-roll-ish sound. Once again, knowing that it might be something that might make Hawkeye roll his eyes, but also still was energetic. You can enjoy it nonetheless. Everyone who sang on it just had the best time.

I know that you've said before that maybe this could be a full musical, so my question is who plays Steve Rogers in Rogers the Musical?

I had asked them to contact Aaron Tveit, but it became apparent that they could only do local hires out of Atlanta. And the whole idea of casting it on stage with all Broadway people, it just didn't pass the COVID-ness of it all. But the folks who did portray it on stage were all fantastic. I think they probably had the best time of anyone. I mean, they got to rehearse that for weeks, and to just be in those costumes and doing it, they must have had so much fun.

Hopefully we'll get to see it with the Broadway people as intended, even if it's like just a one night Ratatouille: the Musical thing.

Hawkeye is now streaming on Disney+.

More like this
Entertainment
7.30.2022 12:00 PM
How the most iconic Ms. Marvel scene confirmed the show’s “enormity”
By Mónica Marie Zorrilla
Entertainment
7.27.2022 10:00 AM
Is the Winter Soldier in Captain America 4? Everything we know about Sebastian Stan's role
By Corey Plante
Entertainment
7.29.2022 12:30 PM
Bruce Campbell vs. the Marvel Cinematic Universe
By Jake Kleinman
Related Tags
Share: