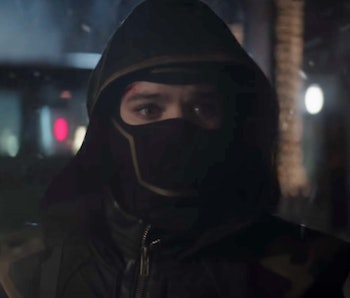 Hawkeye is ready to show a new side of Clint Barton, and that includes digging up his past. While the new Marvel series follows Clint’s journey of moving on from the traumatic events of Avengers: Endgame, it also resurrects an unexpected figure from that movie: Ronin.

Warning! Spoilers ahead for Hawkeye Episodes 1 and 2.

Hawkeye Episode 1 reintroduces Ronin during a secret auction, where Clint Barton persona’s mask, outfit, and weapon are being sold to the highest bidder. Jack Duquesne’s uncle, Armand, wins Ronin’s sword before the auction is attacked. In the mayhem, Jack steals the blade, while Kate Bishop swipes Ronin’s outfit and uses it as a disguise to fight off the attackers and escape unnoticed.

As Kate soon learns, wearing Ronin’s garb puts a target on her back, as the same men who attacked the auction come after her. When Clint sees Ronin on TV, it’s a flash from the past. He hurries to find Ronin only to discover that it is Kate, a young woman who clearly doesn’t know what she just unleashed.

Ronin is an important figure both to Clint’s past in the Marvel Cinematic Universe and the comics. Here’s a quick refresher on Ronin and the key characters who have assumed the vigilante’s identity.

Avengers: Endgame introduced Clint Barton’s Ronin on screen. After losing his family in the Blip, Clint assumes the identity of a masked vigilante who hunts down and slaughters criminals. While the movie does not outright refer to Clint as “Ronin,” he dons the character's attire in the film. Hawkeye confirms that Clint was, in fact, Ronin for an unspecified amount of time in the gap between the Snap and Endgame.

With its first two episodes, Hawkeye seems to explore Clint’s past as Ronin by having him deal with the consequences of his actions. He feels guilty for the crimes he committed and wants to make sure Kate doesn’t get hurt by all the enemies he made.

While this aligns with the story set up by Endgame, the comics reveal Clint was actually the second person to assume the Ronin identity. In a twist, Ronin was first adopted by none other than Maya Lopez (aka, Echo).

The daughter of Kingpin, the deaf Native American heroine Echo (played by Alaqua Cox), could be a major character in Marvel’s Phase Four with her own Disney+ spinoff already confirmed. We first meet her in the final moments of Hawkeye Episode 2, when she is revealed to be the show’s antagonist. Given Echo’s comics history as Ronin, it makes sense that she was chasing the vigilante, but to what end?

Echo debuted as Ronin in New Avengers #11, published in 2005. She assumed the identity after feeling unworthy of joining the New Avengers because of her criminal past. She chose Ronin because it means "Masterless Samurai" in Japanese. After fighting with and against the Avengers, she eventually handed the Ronin identity to Clint Barton.

It’s unclear if the MCU’s version of Echo was also Ronin before Clint donned the suit and sword, or if she plans to take over the secret identity in the future. Either way, the comics confirm that Echo has a strong connection to Ronin, and it will be interesting to see if this is the first time Clint and Echo are meeting or if the two have a shared history yet to be uncovered onscreen.

Hawkeye Episodes 1 and 2 are now streaming on Disney+.