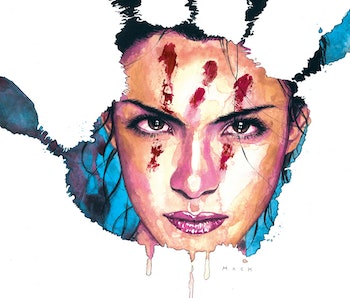 Eternals introduced the first deaf superhero in the Marvel Cinematic Universe earlier this month. But soon enough, Lauren Ridloff’s Makkari won’t be the only superhero representinf this community.

At Disney+ Day 2021, Marvel officially announced Echo. Set in the Marvel Cinematic Universe, the series will center around the Marvel superhero Echo, played by acting newcomer Alaqua Cox. She will first appear in the upcoming series Hawkeye in a supporting role before starring in her solo streaming series.

Here’s everything Marvel Studios unveiled about Echo at Disney+ Day.

What Happened? — On November 12, Marvel Studios unveiled Echo, a new series that will serve as a spin-off from the upcoming Disney+ series Hawkeye, out later this month. Cox — a deaf Native American actress — will make her debut as Echo in that series, co-starring alongside Jeremy Renner’s master archer and Hailee Steinfeld’s Kate Bishop, his protegee.

A premiere date for Echo was not announced.

Though Echo has yet to enter production, Alaqua Cox’s Hawkeye appearance was shown in a preview that played before the presentation starting announcing new series and logos. Echo’s can be seen below:

Who is Echo? — Created by writer David Mack and artist Joe Quesada during Mack’s stint on Marvel’s Daredevil comic book series in 1999, Maya Lopez, a.k.a. “Echo” is a Native American superhero. She is a master of martial arts, acrobatics, and photographic reflexes that basically allows her to “copy” physical feats from other superheroes. She also has a talent for music as a gifted pianist and ballerina.

Echo is deaf, which gives her certain advantages and disadvantages as a superhero. While she has been able to avoid manipulation from characters using auditory commands (David Tennant’s Kilgrave from Jessica Jones, for example, wouldn’t faze her), she cannot communicate with Marvel heroes who wear full face-masks. In the comic book series New Avengers, Captain America relays Iron Man’s questions to Echo, as she is unable to read Tony Stark’s lips behind his faceplate.

In her origin story, Echo’s father is a victim of the crime boss Wilson Fisk, aka Kingpin (a major nemesis of Daredevil and Spider-Man). Kingpin raises Echo as his own daughter and sends her to elite schools that foster her talents. In the Daredevil comics, she is dispatched by Kingpin to go after Matt Murdock, but he and Echo fall in love, leading Echo to turn on Kingpin and leave his side to become her own person.

Later she adopts the identity of Ronin, the first character to do so (before Hawkeye) and becomes a member of the Avengers for a time. In the recent crossover series Enter the Phoenix, Maya inherits the Phoenix Force and adopts the name “Thunderbird,” after the late X-Men member.

Mutants and Devils — Given the deep connections to Daredevil and X-Men comics in Echo’s comics history, it will be interesting to see Echo as a potential gateway to those characters entering the MCU. After all, her origin is deeply rooted in the story of Kingpin, who was played by actor Vincent D’Onofrio in three seasons of Daredevil on Netflix. If the Disney+ series will feature her origin in any way, it can’t do so without making mention of Kingpin.

Matt Murdock exists in the MCU, technically speaking, and leaks indicate that Marvel/Netflix star Charlie Cox (no relation) will reprise his role from the Netflix series in the upcoming Spider-Man: No Way Home, directly tying in that adaptation with the future of the franchise.

As for Echo’s dynamic with the X-Men and Phoenix Force, those are very recent developments in Marvel’s comic books, so it’s unlikely Echo will adapt that storyline right away. But if there was ever a time to introduce the Phoenix Force to the MCU, having it appear in Echo could make the series a great setup for the X-Men.

The Inverse Analysis — Echo was only fleetingly mentioned on Disney+ Day, so you could be forgiven for forgetting it was announced given buzzier reveals like Secret Wars. Yet the show’s existence makes history, as it will serve as both the first Native American-centric superhero TV series and the first superhero series built around a deaf actor.

There are of course Indigenous superheroes and disabled superheroes in the existing media landscape. But for a character to represent both in their own live-action TV series? Those are some remarkably major firsts for Disney+.

Furthermore, the show does tease the future direction for the MCU. Depending how the show handles its lead character, the MCU could be re-embracing Marvel series Daredevil, a show that won acclaim from fans across three seasons on Netflix.

Whether Echo will also lead to revivals for Daredevil-adjacent shows like Jessica Jones, Luke Cage, The Punisher, and even Iron Fist remains to be seen. But as even Marvel likes to say: The universe is expanding.

Echo does not yet have a release date.

More like this
Entertainment
Jan. 25, 2023
The MCU could bring back a hero from its most underrated TV show
By Dais Johnston
Entertainment
Feb. 3, 2023
Marvel just revived its primate assassin — What to know about Hit-Monkey
By Mónica Marie Zorrilla
Entertainment
Jan. 30, 2023
Doctor Who Could Become the New Marvel — But There's a Catch
By Ryan Britt
LEARN SOMETHING NEW EVERY DAY.
Related Tags
Share: