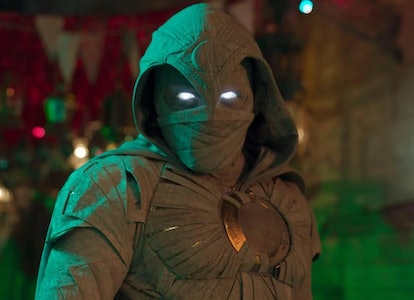 Moon Knight Episode 6 didn’t need to answer every question. The revolutionary Marvel Cinematic Universe series broke the mold in several ways — by portraying mental illness, by completely shifting what we know as reality, and by standing apart from the mainstream MCU. But there was one question it absolutely needed to answer: Who is the third alter ego who kept mysteriously taking over Steven and Marc’s body?

Thankfully, the inevitable post-credits scene did just that. Here’s what it means for the future of Marc, Steven, and Moon Knight.

Episode 6 ended with Marc and Steven wagering their release from Khonshu’s bargain and waking up exactly where they started, chained to Steven’s bed. But like any good Marvel story, this isn’t the end of the story.

Just like the abrupt transition in Episode 4 where Marc suddenly appeared in an asylum, the post-credits scene in Episode 6 opens with Harrow in a similar situation, seeing sand where there isn’t any. How is this possible? Harrow was murdered and his body was used to imprison Ammit — or at least it looked like that. But in a split-second shot, Harrow’s hand twitches. Just as Marc and Steven were able to bounce back from the afterlife, apparently Harrow can too.

Weak and confused in the asylum, Harrow is wheeled out by a mystery man, who unceremoniously dumps him in a white limousine where Khonshu is waiting. Only then do we finally get to see this man’s face.

“Meet my friend, Jake Lockley,” Khonshu says, and the limo driver glances into the rearview mirror — it’s a new character played by Oscar Isaac. Lockley, speaking only Spanish, aims and fires at Harrow.

This is a monumental change to the Moon Knight story in many ways. First, it finally does away with the villain Arthur Harrow, shooting him point-blank just like when he first shot Marc/Steven. But the most important reveal is Jake Lockley, the third alter ego who fought the most brutal fights of the series (that we didn’t see). Whenever Marc or Steven wavered, it was Jake who took over their body.

Fans have been speculating about Jake Lockley appearing in the MCU for weeks now, and his name has even trended on Twitter despite not appearing on screen until now. So while this may be a surprise, it’s definitely not unexpected.

What does Moon Knight’s post-credits scene mean for Season 2?

So, what does this mean for Moon Knight? Well, the story isn’t over, the only remaining mystery is how it will continue.

Seeing how disconnected Moon Knight is to the greater MCU, it doesn’t seem like this superhero’s story will continue in another movie, like how WandaVision continues into Doctor Strange in the Multiverse of Madness. It’s much more likely Moon Knight will follow Loki’s lead and get confirmed for a Season 2.

This would explain the deleted tweet from the official Marvel Twitter account describing Episode 6 as the “series” finale, before being replaced by “season” finale. Unlike so many other MCU shows, Moon Knight isn’t a one-and-done. This hero contains multitudes, and his spinoff adventure seems to just be beginning. Now, we must simply wait to see where Marvel Studios decides to take Moon Knight next.