“I liked the villain” 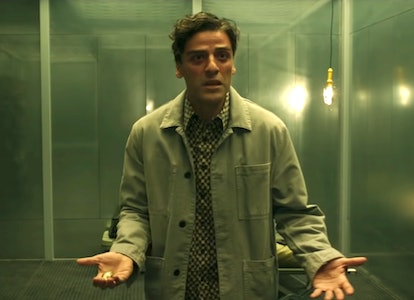 Moon Knight has never been one to follow fans’ expectations. You want to see Oscar Isaac kick butt and take names? You’ll see that, but you’ll also see him do a silly British accent, feed his fish, and talk to a living statue. You want Ethan Hawke to play a classic Marvel villain? Instead, he’s a quasi-David Koresh cult leader looking to create a new world. Spoilers for Episode 4 ahead.

But probably the biggest surprise is at the end of Episode 4 when in the middle of all the action, the show suddenly segues to a grainy VHS tape. And then we see Marc Spector as a patient in a mental institution. Here’s what that means for Moon Knight and the Marvel Cinematic Universe as a whole.

What happened? — At the end of Moon Knight Episode 4, we see Marc in a mental institution along with some familiar faces like Layla and Donna. But most importantly, we see Arthur Harrow as a psychiatrist who acknowledges Marc has been having difficulty separating fantasy from reality. It seems to suggest that the adventures we’ve seen Marc undergo so far are merely in his head... or are they?

This plot device in Moon Knight is a prime example of the unreliable narrator, a literary term for when the story’s point of view character affects how the images are portrayed on screen. One great example of an unreliable narrator in superhero movies is 2019’s Joker. Joaquin Phoenix’s Arthur Fleck affects the action of Joker — we see him in a romance with his neighbor, but that turns out to all be a fantasy.

The unreliable narrator is an incredibly useful and shocking trope, but there’s not really any evidence of it in the MCU. But in Marvel Comics, it’s all over the place — even in Moon Knight.

In the Jeff Lemire run of Moon Knight, the hero who had long loomed over the comics was suddenly a mental patient, just like in the series. It was also the comics that introduced Mr. Knight, evidently showing how it was an influence on the Disney+ series.

Over the course of the run, the Moon Knight character was basically rebuilt. By the end, it’s revealed Marc’s doctor is actually the Egyptian god Ammut in disguise, and the “unreliable narrator” reveal is upended when we learn that what Marc had experienced before the mental institution was real, not a fantasy. Could this giant gaslight of both Marc and the audience also happen in the show? It seems likely given everything that has happened in the first half of Moon Knight’s season.

The Inverse Analysis — The MCU’s Phase 4 is clearly leaning towards the psychological, and we may just see more unreliable narrators, like Steven and Marc, in time. Moon Knight has made its name as the most experimental MCU show so far, and this may just be another example of how it’s driving the conversation.