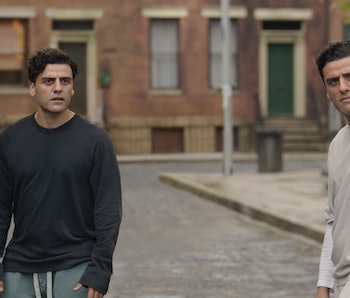 Marc Spector may be Moon Knight, but he’s definitely not the lead of Marvel’s Moon Knight. From its very first episode, the Disney+ series has rooted itself in the perspective of Steven Grant (Oscar Isaac), one of Marc’s alternate identities. Initially that decision made sense, because it meant the audience was learning things at the same time the protagonist was.

However, in the weeks since Moon Knight’s premiere, it’s become increasingly clear that Steven Grant isn’t just a vessel for the audience. Steven is, in fact, the main character of Moon Knight, and the show’s emotional fifth episode makes that clear.

The Key to Understanding Yourself — In Moon Knight Episode 5, Marc and Steven are forced to relive many of the former’s worst memories. The journey they take reveals important details about Marc’s life, including the abuse he suffered as a child at the hands of his mother, how he became Khonshu’s (F. Murray Abraham) fist of vengeance, and how his and Steven’s lives began to bleed together.

At the end of the episode, Steven has come to understand Marc in a way he didn’t before. He assures his alternate self that he didn’t deserve the abuse he suffered as a child, and tells him that his brother’s death wasn’t his fault. Moments later, when the spirits of the Duat attempt to drag them both into the realm’s eternal sands, Steven begins to defend and fight for Marc.

The episode’s conclusion marks a turning point for the character that Moon Knight had seemingly been building towards from the beginning. Marc, however, doesn’t change much. He starts the episode unwilling to take the trip down memory lane that the Duat demands, and while he eventually accepts it that’s the extent of the emotional growth he experiences throughout Episode 5.

That’s because Moon Knight Episode 5 is less about Marc Spector coming to terms with his dissociative identity disorder, and more about Steven Grant finally learning how to understand Marc.

Across Moon Knight’s first five episodes, Steven has had far more screen time than Marc, staying in control of his body for most of the show’s first, second, and fourth installments. That detail has been why Moon Knight has struggled to maintain a constant sense of forward momentum, and Steven’s unwillingness to get involved in Marc and Khonshu’s mission in Moon Knight’s first two episodes seriously hampered the show’s ability to actually dive into its central story.

Despite that, Steven has always been portrayed as the voice of reason. He’s also learned the most of any of its characters, and transformed more than anyone else. In Moon Knight Episode 5, he took an increasingly active role in the show’s story by not only forcing Marc to face his past, but also by stepping up and fighting for their lives when the unbalanced souls of the Duat come for them.

Steven has been in Moon Knight’s driver’s seat more than any other character, including Marc. By making Episode 5’s climax all about Steven comforting and defending Marc, the series has completed his arc from passive to active protagonist, and has also put Steven at the center of a major emotional moment.

The Inverse Analysis — Marc Spector spends much of Moon Knight Episode 5 on the sidelines, either actively refusing to revisit his past or passively watching Steven experience his memories for the first time. The episode’s conclusion, which sees Steven end up frozen on the sands of the Duat, opens the door for Marc to take the reigns again in Moon Knight Episode 6.

But with only one installment left to go in Moon Knight’s first season, it’s hard not to feel like the series has shortchanged Marc Spector. When you look back on its first five episodes, it becomes clear that the story Moon Knight has been telling all along isn’t about Marc Spector dealing with his own mistakes and the nature of his disorder, but about Steven Grant making peace with his alternate self.

That doesn’t mean Moon Knight hasn’t succeeded in telling an interesting story, but the one it has told definitely isn’t about Marc Spector.