“I feel the pain inside of you.” 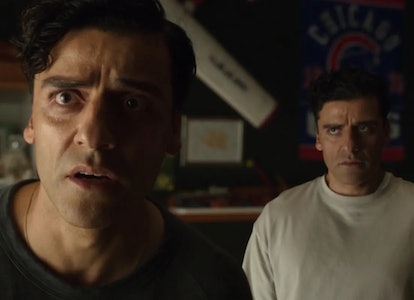 Grief and Trauma. If there are three words that sum up the recent thematic trends of the Marvel Cinematic Universe, those are them. It’s like the entire world has been reeling from the events of Avengers: Endgame. Wanda held a whole town hostage while trying to grieve her husband. Bucky deals with PTSD in The Falcon and the Winter Soldier. Even Peter Parker and his classmates aren’t immune to mourning their lost years.

Moon Knight is no exception — Marc’s creation of Steven is motivated by trauma. But this reveal is handled in a completely different and more human way. Here’s why it matters.

In basically every recent tragic backstory we’ve seen in MCU projects, the tragedy is caused by a supervillain. Echo lost her dad thanks to Kingpin, Monica Rambeau lost her mom because of Thanos, Yelena lost her sister because of her sacrifice on Vormir. Even bubblier characters are affected, like Kate Bishop’s dad being lost in the Battle of New York. Each of these stories is rooted in the fantastical elements of the MCU.

It’s easy to see why these story beats are so consistent. The best way to motivate a hero is to give them a personal reason to fight a threat, so whoever the villain is they usually affect the life of the protagonist.

But Moon Knight is different. Marc’s family wasn’t displaced by the Blip or murdered by Arthur Harrow. He was just a young boy who lost his brother in an accident he blames himself for, and who then faced abuse from his mother.

It’s these events that lead to Steven Grant eventually entering the picture, and Khonshu adopting Marc as his avatar. Marc’s not a hero on a righteous mission; he’s a damaged man who stumbled into a supernatural affair.

Why does this matter to the MCU? There’s always an appeal to watching a superhero be superheroic, but it can be difficult to relate to a character who lacks the experiences of regular people. Marc’s story is more human, and it also gives credence to those who deal with similar trauma. Loss is loss, regardless of the circumstances.

It’s unlikely that this will be a permanent change, as the tragic mystical backstory is a hallmark of the MCU, but it’s nice to see it isn’t a necessity. Sometimes bad things happen, and to an individual that can be just as traumatic as a world-threatening villain. Marc’s world was ruined to the point where he created another self just to bear that weight, and it just so happens that he’s the one chosen by Khonshu too.