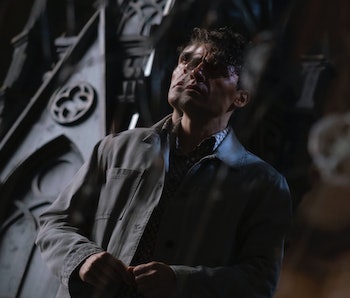 In a lot of ways, the end of Moon Knight Episode 2 also marks the end of the Disney+ show’s first act. After spending most of its runtime focused on Steven Grant (Oscar Isaac), Moon Knight Episode 2’s final moments see Marc Spector take back full control of his body from his awkward British alter ego. This time, the series doesn’t shy away from showing the damage Marc is capable of unleashing either (even if it’s CGI and bloodless).

The episode’s closing minutes also pack in a few shocking revelations and an unfortunate twist of fate for Marc and his Egyptian deity, Khonshu (F. Murray Abraham), and it ends with both characters leaving London behind. As a result, Moon Knight Episode 3 has the potential to look and feel very different from the show’s opening two installments.

So what exactly happened at the end of Moon Knight Episode 2? Let’s dive in. Spoilers ahead!

After spending most of the episode refusing to let Marc assume control of their body, Steven Grant finally agrees during the climax of Moon Knight’s second installment. In return, Marc defeats the monster that Arthur Harrow (Ethan Hawke) conjured, but he also tells Steven that he doesn’t plan on letting him take control again anytime soon.

Steven is, understandably, not pleased, but Marc insists that he has to accomplish Khonshu’s task. If he doesn’t, Khonshu will abandon Marc and choose none other than Layla El-Faouly (May Calamawy), Marc’s wife, as his new avatar. Khonshu threatens Marc with that very possibility just moments later while also informing him that Harrow has taken possession of the very artifact Marc had been trying to protect.

From there, Moon Knight follows Marc as he arrives in Egypt, intent on finding the location of Ammit’s tomb before Harrow does.

Moving forward, there are a number of different directions Moon Knight can go. Presumably, the show’s next episode will center largely on Marc’s quest to find the location of Ammit’s tomb before Harrow and his followers do. How exactly Marc’s investigation will play out remains to be seen, but knowing him, it’ll probably involve the use of some brutal methods to get the information he seeks.

As for the show’s other characters, it seems safe to assume Layla won’t be far behind. While Moon Knight Episode 2 only confirms Marc’s arrival in Egypt, Layla does see Harrow pick up the scarab that can lead him to Ammit’s tomb. Given how knowledgeable she is about Egyptian mythology, there’s a good chance she knows where to go next.

If that happens, Moon Knight Episode 3 may show Layla actually interacting with Marc for the first time. That is assuming, of course, that Steven doesn’t find a way to take control of his body again first.

Moon Knight Episode 2 sets the series up to embark down a new and different path in its third installment. Not only will the Egyptian setting of Moon Knight’s third episode provide the series with a refreshing change of locale, but it’ll also allow the superhero show to continue exploring the history and methods of the Egyptian gods within the Marvel Cinematic Universe.

That presents an exciting opportunity for the series, one that should help Moon Knight keep a healthy level of intrigue going for, at the very least, one more week.

Oh, and if you were wondering about the song that plays over the episode’s end credits, it’s “El Melouk” by Ahmed Saad featuring 3enba and Double Zuksh. Listen to the full thing below: