Who is Layla El-Faouly? 'Moon Knight' may be setting up a massive X-Men event 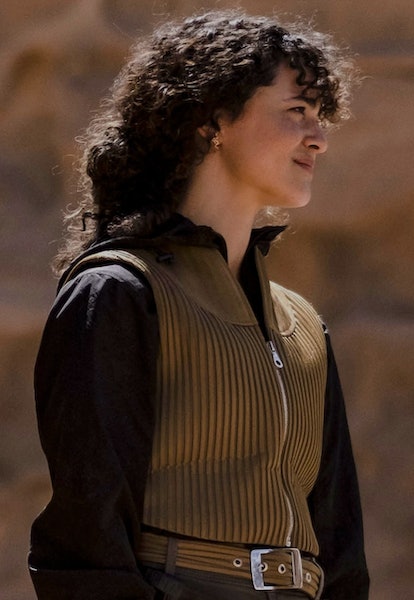 The running gag in Moon Knight Episode 2 is that while Layla believes her husband, Marc Spector, is currently riding around with her on a motorcycle and beating up invisible Jackals while using a very bad British accent to ward off Arthur Harrow and his cult, Steven Grant is more stunned and confused than ever by this beautiful, adventurous woman he’s supposedly married to.

Viewers also have reason to be perplexed by Layla El-Faouly. Who is this new character and what does she mean for Moon Knight and the Marvel Cinematic Universe at large. There’s nobody by that name in the comics, but there’s another character with a similar name who could serve as the inspiration for Marc Spector’s wife.

Are Layla Miller from Marvel’s House of M comic and Layla El-Faouly? And if so, what does that mean for the MCU? Let’s dive in.

Who is Layla Miller in Marvel?

If you have no idea who Layla Miller is, don’t fret. The mysterious blonde with a scarred tattooed “M” above her eye has never been a fixture in any on-screen Marvel property.

She has, however, been a key player in the pivotal House of M comic book event. Created in 2005 by Brian Michael Bendis and Olivier Coipel, Layla Miller is introduced as an outcast orphan mutant who can breathe fire and has horns in House of M #4. Layla Miller's life changes radically when Wanda Maximoff (aka, Scarlet Witch) decides to warp the nature of existence in order to create a mutant utopia.

As a result, Layla is plopped into a timeline in which her parents never perished and her abilities now include the perception of different realities. With this power, she’s able to restore the memories of heroes like Luke Cage, Wolverine, and Emma Frost. Later on, Doctor Strange harnesses those powers to stop Wanda once and for all.

By the end of House of M, Wanda is forced to restore reality only to significantly decimate the mutant population. Layla Miller returns to her “normal life,” losing some of her other extraordinary faculties, but picks up some new powers in this old-new timeline: reanimation, healing, and connecting with the souls of the dead.

While the prospect of Moon Knight’s Layla El-Faouly being the MCU’s answer to Layla Miller— and thus a proper introduction of mutants in the MCU — is an exciting one, Layla Miller’s lack of any canonical encounters with Moon Knight in the comics renders the theory slightly threadbare.

Still, it isn’t impossible. After all, it wouldn’t be the first time Marvel Studio execs and writers play around with superhero origin stories in order to make them fit a grander plan.

So far, the only connection we can feasibly draw between Layla Miller and the MCU’s small-screen adaptation of Moon Knight is (what we believe to be) Latveria. The small, vaguely Eastern European village where Steven Grant wakes up with a dislocated jaw in Episode 1 could be Dr. Victor von Doom’s Balkan realm. Layla Miller spent a year abroad studying science, magic, and exorcism under Doctor Doom. Coincidence?

While we haven’t seen Layla El-Faouly in this alpine town — at least not yet — the possibility of Latveria being depicted in Moon Knight could serve as a strong foundation for the validity of this Layla Miller theory.

By the end of Moon Knight Episode 2, all we know is that Layla El-Faouly is Marc Spector’s lawful wife and she’s been trying to reach him on the phone, relentlessly, since he up and disappeared.

Oddly, in their ten years of marriage, Layla El-Faouly caught onto the fact that her husband was the servant and avatar of the Egyptian god of the moon and vengeance, Khonshu, and had a basic knowledge of his past as a ruthless mercenary, but his Dissociative Identity Disorder remained concealed from her. (Which prompts other questions about their past together, pre-Moon Knight.)

There is nothing in the first two episodes of Moon Knight to suggest that Layla El-Faouly has superhuman powers. She’s clearly brilliant and well-learned, with a similar reverence toward ancient Egyptian culture as Steven Grant. She also has fighting skills on par with Marc Spector, as well as a knack for finding artifacts and “returning” them to their original owners. We also know she is a native of Egypt and that her father was an ill-fated archaeologist.

Why then, is Khonshu so interested in making Layla El-Faouly his next avatar? Is this merely a threat to psychologically terrorize and exploit Marc Spector, weaponizing his love for his wife and ensuring his submission? Or could Layla El-Faouly (and her potential mutant powers) hold the key to something that this vengeful god needs?

The Inverse analysis— Khonshu’s desire to oust Marc for Layla could, indirectly, be further fodder for the Layla Miller = Laya El-Faouly premise. Since gods are, theoretically, omnipotent beings that can “see all,” Khonhsu may be able to detect in Layla El-Faouly mutant genes with untapped potential that could prove useful in doing his bidding. Or perhaps, Khonshu is able to detect secret powers Layla El-Faouly has been knowingly keeping under wraps.

The theory might be a huge stretch, but, either way, it is fun to consider the many ways in which Marvel could be prepping the landscape for the formal introduction of mutants and Wanda Maximoff’s reign as the It Girl of the MCU.