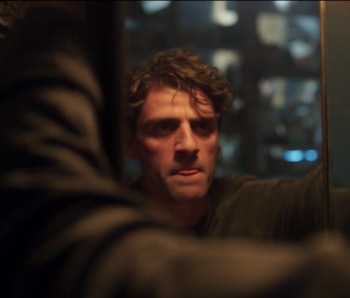 In the colorful furor of Disney+ Day 2021, a dark hero emerged.

Moon Knight will star Isaac, best known for roles in Dune and Star Wars, as Marc Spector, a mercenary and former U.S. Marine with dissociative identity disorder (DID). When Marc meets the Egyptian god Khonshu, he is gifted special powers and is tasked with serving as Khonshu’s avatar on Earth.

Here’s everything we learned so far about Marvel’s newest superhero series.

What Happened? — On November 12, Disney unveiled a teaser for Moon Knight, a new Marvel superhero series from Marvel Studios. The show does not yet have a release date.

The series will introduce the character of Marc Spector, played by Oscar Isaac. Set in the Marvel Cinematic Universe, Moon Knight will surely tie into the larger franchise by the end of its first season, like Loki and WandaVision before it. The teaser for Moon Knight was part of a larger preview of new Marvel shows for Disney+, including Ms. Marvel, She-Hulk, and X-Men ‘97, a continuation of the original X-Men: The Animated Series.

The teaser for Moon Knight was light on plot specifics, but it did show Isaac in character as Marc Spector, who struggles to come to terms with his powers. “I can’t tell the difference between my waking life and dreams,” Isaac is heard saying (with a strange Cockney accent) in voice-over.

A violent sequence of Moon Knight pummeling bad guys in a dirty bathroom was shown, along with a shot of Moon Knight leaping across rooftops. A full reveal of the costume was not seen in the presentation, which should only add to the series’ mysterious nature for now.

You can see screenshots of the Moon Knight teaser below.

It’s Friday Knight — In addition to Oscar Isaac, the show will also star May Calamawy (Ramy) in an as-of-yet-undisclosed role, and Ethan Hawke, previously rumored to be playing Werewolf By Night. (A separate Werewolf By Night project is reportedly in development.) Hawke has previously said his role is based on real-life cult leader David Koresch.

Though Marvel does not have showrunners in the traditional sense, it has head writers, with Jeremy Slater (Fox’s The Exorcist, Netflix’s Umbrella Academy) serving in that role on Moon Knight and Mohamed Diab, writer/director of the acclaimed 2010 film 678, as director of four episodes. Filmmaking duo Justin Benson and Aaron Moorhead (The Endless) will direct another two episodes; Moon Knight is expected to run for six episodes, each 40-50 minutes long.

While the character originates from comics by Doug Moench and Don Perlin, the series hints at inspirations from other different Moon Knight comics, including runs from Brian Michael Bendis, Warren Ellis, Jeff Lemire, and Max Bemis.

It was in Bendis’ comics that Moon Knight’s mental illness was made more explicit, while subsequent runs of the comics explored Marc being haunted by Khonshu and the spirit world that grants him his abilities.

Identity Crisis— One of the more interesting aspects of Disney+’s Moon Knight was the way Marc Spector’s mental illness appears to be revealed through his different accents.

In the comics, Marc took on alternate personalities, including that of a playboy millionaire named Steven Grant and taxicab driver Jake Lockley. For Marc, the different personas were his way to infiltrate different circles of the criminal underworld. Over time, the comics revealed that Marc’s invention of these personalities was the result of either childhood brain trauma and/or the connection to Khonshu. (It has never been made clear which is the cause.)

Isaac is heard in the Moon Knight teaser sporting both a Cockney accent and an American accent, both times in voice-over. The official synopsis for the series confirms that Marc has different personalities, and it’s evident those personalities will all have differing accents. All told, this will make the Moon Knight series an unusual entry — even in the vast, diversifying Marvel Cinematic Universe.

The Inverse Analysis — Depictions of mental illness in popular culture are overdue for a serious reevaluation, as certain depictions can (and do) perpetuate negative stereotypes, which prevents people who live with these disorders from receiving proper treatment. It will be interesting to see whether the MCU’s depiction of DID will handle the subject sensitively as Moon Knight approaches its release date.

With that in mind, the recent M. Night Shyamalan movie Split seems to serve as some less offical inspiration for Moon Knight, with Isaac taking on a different speaking voice for each of his different personalities as James McAvoy did in that film. Given that neither Isaac nor his character Marc Spector are English, there has to be a reason for the terrible accent he has in the teaser.

Moon Knight does not yet have a scheduled release date on Disney+.