Here and Not Here

“No one has yet found them.” 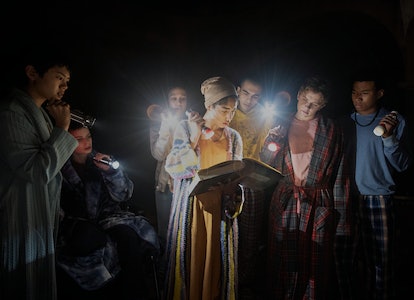 The world of The Midnight Club is intensely steeped in the Flanagan-verse. It’s based on a pre-existing piece of written horror fiction. It grapples with the concept of death and how it affects the living. And, most crucially, it’s full of Easter eggs referencing previous Mike Flanagan shows and movies.

It’s based on a work of horror fiction, just like so many of his previous shows, it grapples with the idea of death and how it affects those who are living, just like his other shows, and, crucially, it’s filled with a bunch of Easter eggs referencing his other work — including a few that Flanagan claims no one has noticed.

“This is gonna sound ridiculous, but it's true,” Flanagan said. “Hamish Linklater, Carla Gugino, and Kate Siegel all appear in the show, but no one has yet found them.”

Granted, this quote is from the day before the series’ wide release, but there’s still no trace of any fan spotting them so far. That doesn’t mean it’s impossible, however. We have a huge clue that may just help you in your search.

When Inverse asked if we see these actors’ faces in the series, Flanagan gave a firm no. So it looks like these cameos aren’t something to look for but to listen for. But where could Flanagan hide these actors’ voices in the series? Are they the ghostly voice of the apparitions Ilonka keeps seeing or a voice on the other end of a phone? Could one of them even be the eerie voice of Dusty’s mom in Kevin’s Midnight Club story?

It makes sense that these actors would be worked into the series somehow. Kate Siegel is Flanagan’s wife and often stars in his works, Hamish Linklater stole the show in Midnight Mass, and Carla Gugino herself had a voice role as The Judge in Midnight Mass.

According to Flanagan, there are some more obvious easter eggs — the Lasser glass from Oculus, of course, shows up — but there are also references to Flanagan’s favorite works. “We snuck a Die Hard poster into the frame, just for one shot,” Flanagan says. “It's never seen again in the show and just appears on the wall for one line.” There are even some easter eggs that won’t make sense until the release of The Fall of the House of Usher, Flanagan’s next series.

But while those are either obvious or inaccessible, these voice cameos are just waiting to be found. The ghosts of Flanagan stories past are haunting The Midnight Club, and it’s up to us to figure out just where they are. Are you up for the challenge?

The Midnight Club is now streaming on Netflix.