'Godzilla vs. Kong’s best monster was inspired by a bad Transformers movie

“I couldn’t tell what the hell was going on.” 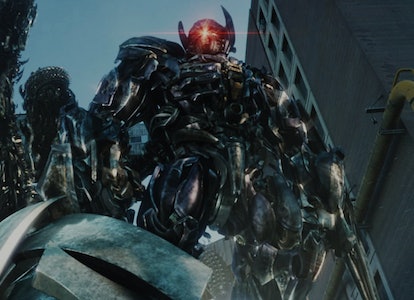 The best part of Godzilla vs. Kong isn’t Godzilla or King Kong. Instead, another classic Japanese movie monster joins the battle, and while it’s technically a surprise, it’s no big secret that Mechagodzilla plays a major role in the new Monsterverse movie.

“I just always loved the simplicity of the Transformers designs, Wingard tells Inverse. “So I tried to create a look to the character that was punchy and just had a bit more simplicity. There’s an immediacy to his shape and outline.”

For Wingard, Mechagodzilla has always been the dream. The director behind popular horror movies like You’re Next and The Guest, along with Godzilla vs. Kong and the upcoming Face/Off 2, says he was aware of the mechanical lizard monster before he even saw a Godzilla movie. “I just was like, obsessed with him, you know?”

But when Wingard first signed on to direct the new film, he didn’t realize Mechagodzilla would play a role. After signing a non-disclosure agreement, he met with Legendary Pictures executive vice president Alex Garcia, who revealed the movie’s secret monster.

The origin story of Mecha Godzilla

Believe it or not, Mechagodzilla was inspired by Godzilla’s rival, King Kong. “Mechani-Kong,” a villain in the 1967 Toho-produced film King Kong Escapes, was the basis for an artificial Godzilla clad in metal armaments. It was both a cost-cutting measure (robot costumes were cheaper to make than monstrous ones) and an attempt at trend-chasing; the filmmakers hoped Mechagodzilla would appeal to the growing audience of giant robot anime fans.

The dice roll worked. Though not a smash hit, 1974’s Godzilla vs. Mechagodzilla, which marked Mechagodzilla’s first appearance, did resuscitate the then-waning Godzilla franchise. On a budget of $1.2 million, the movie earned a worldwide total of $20 million by 1980.

How Godzilla vs. Kong changes Mechagodzilla

Adam Wingard’s movie modernizes the design to match the style of the modern Godzilla films, but he also changes the robot’s backstory. Warning! Spoilers ahead.

In Godzilla vs. Kong, Mechagodzilla is the creation of an evil corporation called Apex Cybernetics, whose CEO is determined to build a weapon powerful enough to challenge Godzilla’s dominance. To do so, he takes two of the heads from Ghidora (the three-headed villain from 2019’s King of the Monsters) and uses their telepathic connection to build a giant metal dinosaur that can be piloted from miles away. (Confused? Don’t worry, it doesn’t really make sense in the movie either.)

“I can finally put my stamp on the monsters.”

The new and improved Mechagodzilla also gets a bold new design. Gone is the goofy robot suit, replaced with gleaming and steaming metal accented in red neon lights. The monster also uses rocket thrusters to zoom around downtown Hong Kong. (The original Mechagodzilla had a jetpack, but not rocket-powered punches.)

For Wingard, Mechagodzilla was his one chance to design an entirely new monster, rather than refining the creations of previous Monsterverse films.

“As a director, it's exciting because I can finally put my stamp on the monsters,” he says. “Godzilla and Kong had already been redesigned for the MonsterVerse.”

To do so, Wingard thought back to another classic giant Japanese robot, but the inspiration for Mechagodzilla’s new look actually came from one of the worst movie experiences the director ever had.

Wingard says that when it came to Mechagodzilla, he was more focused on avoiding the mistakes of previous films than on copying some other classic sci-fi robot. The director is talking about one terrible movie in particular: Transformers: Dark of the Moon.

“I remember watching the third Transformers movie in the theater,” Wingard recalls. “It was one of those things where I was with a date, and we got there late, and the only seats that were available were literally in the front row. And so I'm sitting there watching Transformers 3 in the front row, and I couldn't tell what the hell was going on.”

“I remember watching the third Transformers movie in the theater.”

He continues, “The Transformers, they just looked like metal. They looked like a plane crash. So I thought, that's the thing I wanted to avoid. They were too complex. There are too many moving parts, and I couldn't latch on to anything. Nothing felt iconic with that Transformers design.”

Before you break out your bionic pitchforks, don’t worry, Wingard assures me he still loves the Transformers franchise. He even took some inspiration from another, much better iteration of the classic tale of battling robots.

“The Transformers animated movie from the '80s with Orson Welles was one of the best movie experiences for me as a kid growing up,” Wingard says. “Period.”

Godzilla vs. Kong is streaming now on HBO Max and playing in theaters.

More like this
Entertainment
Jan. 30, 2023
'The Last of Us' Episode 3 Director Reveals the Secret Meaning Behind the Last Shot
By Dais Johnston
Entertainment
Jan. 30, 2023
In Infinity Pool, Brandon Cronenberg Puts Alexander Skarsgärd Through Hell
By Isaac Feldberg
Culture
Jan. 28, 2023
Sci-fi legend René Laloux’s final movie is his most opaque — and maybe his best
By Jake Kleinman
LEARN SOMETHING NEW EVERY DAY.
Related Tags
Share: