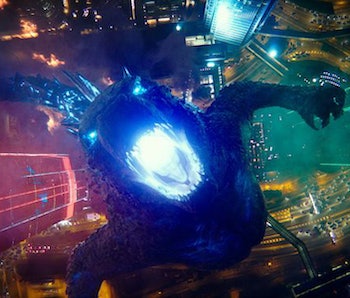 Is the Monsterverse over? Godzilla vs. Kong, the latest entry in Legendary’s kaiju franchise ends with a note of finality. No post-credits scene. No teaser for the next movie. No nothing. So is the end or just a new beginning?

To unpack the ending of Godzilla vs. Kong, we spoke to the film’s director Adam Wingard and writer Max Borenstein about what comes next — or doesn’t.

Why Godzilla vs. Kong doesn’t have a post-credits scene

If you’re wondering if you should stick around after the end of Godzilla vs. Kong for a hint at what comes next. Don’t. You’re not missing anything.

Unlike, 2019’s King of the Monsters, which ends with a credits sequence teasing the return of King Kong and a post-credits scene that set up Mechagodzilla, Godzilla vs. Kong simply cuts the black. The answer why is simple: no one knows what comes next.

“When King of Monsters did their post-credit scene, we were already in production on our movie,” Wingard tells Inverse. “So it made a lot of sense. They knew what they're teeing up.”

In 2021, the future is less clear, but that’s not necessarily a bad thing. Godzilla vs. Kong represents the culmination of a saga that started in 2014. For the Monsterverse, this is a chance to reflect and reboot, not unlike the Marvel Cinematic Universe after the most recent Avengers movie.

“The Monsterverse is at a crossroads,” Wingard says. “Godzilla vs. Kong is what this has been leading towards the entire time. This is the Monsterverse's Endgame.” (For the record, Avengers: Endgame didn’t have a post-credits scene either. A first for the MCU.)

Borenstein, who helped write every movie in the Monsterverse, agrees. He tells Inverse that the future is brighter than ever, and ditching the requisite post-credits scene just gives subsequent directors and writers more freedom to chart their own course.

“This is the last movie in this particular chapter,” Borenstein says. “If it's well-received, then the studio can let filmmakers or storytellers drive what the next installment might look like. It's fun to have a credit sequence, but at some point, when it's forced, the car is driving the horse.”

Wingard adds that, now that Godzilla and King Kong have finally fought, it’s a good thing if the studio takes a break before rushing into the next big kaiju battle.

‘“At a certain point, you have to say, Okay, we've done all the work, now let's sit back and see if audiences are into this. Let's see if the money's there. And if it is, then that will 100% be more of these.”

Ok, spoilers ahead. Turn back no if you haven’t watched Godzilla vs. Kong yet!

Still here? Great. So, as you know, the movie ends with Godzilla and Kong teaming up to tear Mechagodzilla a new one. With the metal monstrosity destroyed, Godzilla swims off into the ocean while King Kong heads home to Hollow Earth (the land-before-time hidden at the core of our planet).

It feels like a pretty final ending, but that doesn’t mean we can’t get a sequel. After all, there are plenty more monsters hiding in Hollow Earth. And Godzilla will definitely return if some other monster threatens humanity, right?

“I think that we tee up plenty of ways that you could continue forward,” Wingard says. “I know how I would continue a sequel to this if I were given the opportunity.”

Will there be another Godzilla movie?

Short answer: we have no idea. Based on everything Wingard and Borenstein say, the answer depends on how Godzilla vs. Kong performs in theaters and on HBO Max.

The long answer? If we do get more Godzilla, Wingard has some ideas for what he’d like to do next:

“I personally would love to do another one if I was given the opportunity. Kind of like when Tarantino said the reason he did Hateful Eight was because he felt like through making Django he just finally learned how to make a Western. He had all these new skills of how to shoot people on horses and an understanding of it, and he wanted to try it again. I feel the same way about making a monster movie. Here are these new skills I have: I know how to associate characters who are six feet and under with characters who are 300 feet and above, and all the complexities within the CGI and stuff. So I would definitely want to utilize those talents now because I have just such a greater understanding of how it all works having gone through it for three years.”

Godzilla vs. Kong is in theaters and on HBO Max now.