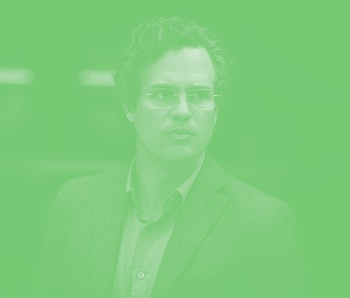 Hulk stream! Hulk smash Netflix! Marvel star Mark Ruffalo, who seems more game to return to the Marvel Universe than his other co-stars, appeared at a convention this weekend. There, the actor revealed some of his own ideas for where the Hulk could go next in the Marvel Cinematic Universe, in addition to teasing some "preliminary" talks for him to return as the Hulk in the new Disney+ series She-Hulk.

At the Chicago Comic and Entertainment Expo this weekend, Mark Ruffalo spent an afternoon taking questions from fans at his own panel. In a wide-ranging conversation that included everything from his Hollywood roles to his political activism, Ruffalo eventually got to talking about his own dreams for the Hulk in future Marvel projects, as well as some potentially huge appearances in future Marvel Disney+ shows.

“There’s some talk about it, but it’s all kind of preliminary," Ruffalo said in regards to the Hulk appearing in She-Hulk. "It would be nice to see Banner, Hulk, Professor [or] somebody show up to help and to guide or a be a gentle guiding presence of She-Hulk as a friend."

The show, announced in 2019 for the streaming service Disney+, will star the Marvel character She-Hulk, a cousin of Bruce Banner and attorney who comes in contact with a smaller dose of gamma radiation. Marvel has not yet publicly revealed the cast for She-Hulk.

Elsewhere during the panel, Ruffalo was asked about what Hulk-centric projects he'd like to see. While acknowledging that Marvel cannot produce a solo Hulk movie due to an existing agreement with Universal Studios ("Universal owns the rights to Hulk, as a stand-alone movie," Ruffalo explained), Ruffalo revealed he'd want to see a Bruce versus Hulk story that results in the creation of his hybrid form, "Professor Hulk" in Avengers: Endgame.

"To be honest with you, I want to see the movie where Banner and Hulk ultimately battle it out and the Professor [Hulk] is the brainchild of that," Ruffalo said. "Kevin Feige, are you listening? We want Professor Hulk!"

Ruffalo also gave a shout out to the X-Men and Wolverine's origins as one of Hulk's oldest enemies, saying: "The only person in the universe that the Hulk afraid of is Banner. And I want to see the ultimate showdown between the two of them. And maybe Wolverine."

Later, another fan asked Ruffalo about a possible Hulk TV series. Another idea Ruffalo floated at his panel is a riff on the 2008 film The Incredible Hulk, which starred Edward Norton in the role of Bruce Banner/The Hulk before Ruffalo replaced him for The Avengers in 2012. "I like starting on the run again. I think that really works," Ruffalo said. "In this new digital age where we're all being surveilled, that might be an interesting dimension to how he stays on the run. That's probably where I'd start. Him deciding, 'I don't want to do this anymore.' But it's hard now because he's the professor. He's hard to hide."

All told, Ruffalo appears invested in Hulk even after his decade-long journey seems all but finished with Avengers: Endgame. While the actor has moved on to other projects — he revealed at that C2E2 panel that he's in talks to portray the father in the HBO remake of Bong Joon-ho's Korean hit film Parasite — he seems enthused to still want to be the Hulk in the eyes of most moviegoers. There are currently no premiere dates or anything for She-Hulk beyond its initial announcement for Disney+, but it's exciting to think that fans haven't seen the last of the Hulk. And, it's a good idea to keep Mark Ruffalo happy. You wouldn't like him when he's angry.

There is no premiere date for She-Hulk on Disney+.