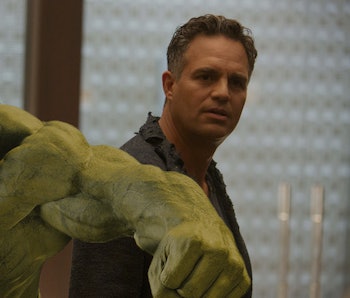 There’s an entity out there in the Marvel Cinematic Universe that the Incredible Hulk fears even more than Thanos, and it’s the green guy’s nerdy other half: Bruce Banner. A lot’s been said about how and why the Hulk didn’t appear in Avengers: Infinity War after taking a beating from Thanos, but now the Hulk himself has spoken about the characters motivations or lack thereof.

In an episode of the Marvel podcast The Marvelists released September 7 called “Heapin’ Helpin’ of Hulks,” hosts Peter Melnick and Eddie Wilson talked to Lou Ferrigno and Mark Ruffalo, arguably the two most important actors to ever play the Incredible Hulk (sorry, Eric Bana and Edward Norton). Ruffalo revealed that the Hulk’s secret trilogy — which began with Thor: Ragnarok and has continued through Infinity War into Avengers 4 — actually began back in Avengers: Age of Ultron.

“There’s a conflict brewing between Banner and Hulk that’s been going on since the beginning,” Ruffalo said during the podcast. “And it all came out of this question that Joss Whedon asked me when Hulk gets the fairy dust from Scarlet Witch sprinkled on him in Avengers 2.”

Joss Whedon asked Ruffalo what the Hulk was afraid of, a difficult question to ask about one of the universe’s strongest beings.

“And then I realized its Banner,” Ruffalo said. “The only thing Hulk is afraid of is Banner.” In May, Infinity War directors Anthony and Joe Russo described this ongoing conflict, saying that Hulk has “had enough of saving Banner’s ass.” But this new perspective complicates their dynamic even more.

Hulk spent the better part of two years on Sakaar subduing Banner because he’s afraid to let Banner out. For years, Banner’s tried his best to stifle Hulk and only use him in times of need. When Thor triggered Banner’s return in Thor: Ragnarok, he seemed shocked that two years had passed. When Hulk and Banner transform, what happens to the other? Is it like a Pokémon going down for a nap inside its Poké Ball? Or does one entity basically cease to exist for a time while the other takes over?

Perhaps that’s the very thing Hulk is afraid of.

Mark Ruffalo says that Hulk’s fear of Banner is something they’ve “been riffing on” since Age of Ultron. “We played with it a lot in Ragnarok, and it continues to be teased out in Infinity War 1 and Infinity War 2.”

This would corroborate various design leaks showing that Hulk will return in a brand-new costume during Avengers 4. It remains unclear exactly how Hulk and Banner might reconcile their differences, but the Avengers will need all the help they can get if they hope to undo Thanos destroying half the universe.

Fans can listen to the podcast episode in its entirety right here: