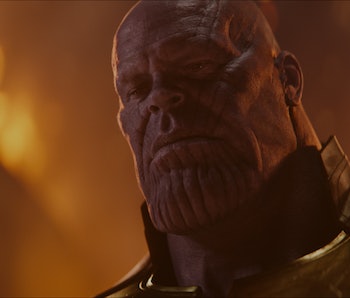 Thanos first appeared in the Marvel Cinematic Universe in the mid-credits scene of 2012’s The Avengers. But, six years later, there is still precious little fans actually know about the MCU’s version of the Mad Titan, played by Josh Brolin. As it turns out, Thanos’s unseen history is a lot bloodier than you might’ve guessed.

Directors Joe and Anthony Russo have previously confirmed that Thanos’s backstory won’t be completely revealed in Avengers: Infinity War, in theaters April 27. But, they did spell out his motivations and why he wants the Infinity Stones in an interview with The Telegraph.

Joe Russo explained that Thanos, who hails from the planet Titan, “is this virtually indestructible character who’s stronger than the Hulk, and has invincible skin.” Thanos seeks the Infinity Stones to heal his planet, which has depleted itself of resources and has an overpopulation problem. Thanos, being the Mad Titan he is, suggested genocide as a solution.

“Many years prior to the film his planet was experiencing a cataclysmic shift. They were running out of resources, and they were overpopulated. Thanos made a recommendation that they exterminate half the population randomly in order to save the rest of the population. Of course, the Titans rejected his notion, branded him a mad man, exiled him, and the planet ended up dying. So he has taken it upon himself to go planet-by-planet throughout the universe and wipe out half of the population of each planet as a way to correct the planet and bring it back into balance.”

At some point, the Rurssos say, Thanos learns about the Infinity Stones, which would give him all the power he needs to balance the universe. “With the snap of his fingers he could correct the universe permanently by removing 50 per cent of life from it,” Joe Russo explains. “So, these are incredible stakes for our characters. If the Avengers were built for anything, it’s for stopping Thanos from completing his goal.”

Added Anthony Russo: “Thanos is the one thing that unifies them all in this movie. So, orientating our story and telling it from his point of view had a lot of practicality to it as well.”

It appears Infinity War, the movie, is taking big liberties from the comic book source material, chiefly 1991’s The Infinity Gauntlet by Jim Starlin. In that six-issue miniseries, Thanos sought the great power of the Infinity Gems (not Stones) to woo the mistress Death. He was undone by his granddaughter, Nebula, whom he had tortured with frailty and advanced aging. When Nebula stole the Infinity Gauntlet, suddenly it was she who was the villain, and Thanos had to (briefly) team up with Earth’s defenders and Adam Warlock to stop her.