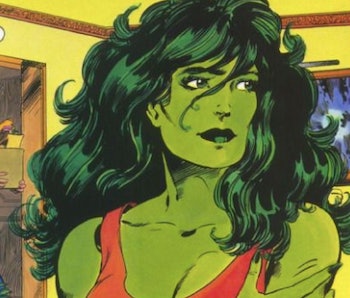 Marvel's upcoming Disney+ series, She-Hulk, has been shrouded in mystery even as we've learned more about Wandavision, The Falcon and The Winter Soldier, and Loki. New unconfirmed reports of a casting call could give us a clearer vision of what's to come in She-Hulk, as well as the next Avengers movie.

According to The Illuminerdi, the casting call for She-Hulk seeks a 26 to 34-year-old actress of any race. The hero's backstory is identical to that of the comics: mild-mannered lawyer Jennifer Walters gains superpowers after receiving a blood transfusion from her cousin, Bruce Banner.

The most exciting tidbit from this rumored casting call? It mentions She-Hulk is a future member of the Avengers, another hint that the Disney+ shows will tie directly into Marvel's blockbuster theatrical releases. If She-Hulk appears in a movie, she would be the first character to transition from original series to movie: all other crossover characters are movie characters moving to television. With this possibility in mind, it's worth revisiting She-Hulk's history with the Avengers in the comic universe.

She-Hulk made her debut in 1980's Savage She-Hulk. After working solo, she joined the Avengers in 1982 in Avengers #122, along with Hawkeye. She was warmly welcomed, even getting a custom costume designed by Wasp herself, Janet Van Dyne. Unfortunately, her spiffy new duds didn't last too long. (Hulk problems, amirite?)

Jen Walters had an on-again, off-again relationship with the superhero squad. In 1985, she became a temporary replacement for The Thing in The Fantastic Four, and she kicked it with them for nearly two decades. She didn't rejoin the Avengers until 2002, in Avengers Vol. 3 #57.

More recently, she was a member of the all-female Avengers offshoot, A-Force. Alongside all these team appearances, she's also had multiple solo runs, but now mainly appears in context of The Avengers, as recently as January 2020.

If these rumors are to be believed, we can look to She-Hulk's tenure with the Avengers as a possible inspiration for the still-unannounced, but widely speculated-about Avengers 5. (That said, considering she was inducted alongside longtime MCU standby Hawkeye, Marvel Studios clearly isn't married to strictly following the comics.)

Regardless, the prospect of Hulk, especially in "Professor Hulk" form, alongside fellow in-between Hulk Jennifer, will provide plenty of family reunion chat between epic action with the new roster of Avengers. Will she be a teammate of Bruce, or his successor? That remains to be seen.