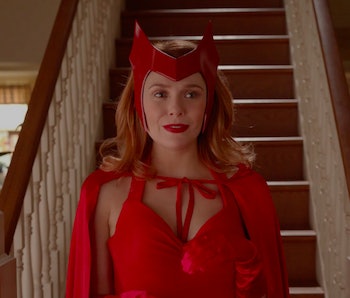 The Super Bowl TV spot for WandaVision introduced the world to two new Marvel characters and a lot of sitcom references, but there's more to the Disney+ series than meets the eye. We know WandaVision will have direct ties to the upcoming sequel, Doctor Strange in the Multiverse of Madness. However, a resurfaced leak from last fall may reveal exactly how the two Marvel properties are connected, and it has everything to do with the introduction of a new Phase Four villain.

Fans have long speculated that WandaVision would play a big role in shaping Phase Four. One theory explained how the Disney+ series might do that by working in the House of M storyline that involved Wanda and Vision’s sons, Speed and Wiccan. The theorist speculated Wanda would suffer a breakdown that leads to her altering reality. Another predicted Wanda would become a villain ahead of Doctor Strange 2. It’s possible both theories were onto something, just not in the way we thought.

Back in November, a leak from Marvel fan site Murphy’s Multiverse claimed Scarlet Witch would unleash her growing power by the end of the Disney+ series, and that the incident will lead directly into Doctor Strange 2. The site also said Wanda’s sitcom reality in WandaVision isn’t of her own making. Rather, it was instigated by the villain Nightmare, who has already been cast and will serve as the villain for the Disney+ series and the Doctor Strange sequel.

While this is purely speculation at this stage, this November leak has already gotten a few things right, correctly predicting that WandaVision would be “part-sitcom homage” and that it would involve Wanda and Vision’s kids. We already saw two cribs in the trailer, so the idea of Nightmare being a two-fer villain for the Disney+ series and Doctor Strange in the Multiverse of Madness could become a reality.

But, who is this Nightmare guy anyway? In the comics, Nightmare is an incredibly powerful being who rules over the “Dream Dimension,” a place where humans can enter while asleep. If someone is tormented, Nightmare can see fit to lure them into a dreamscape, can weaponize their fear, and draw power from the dreamer’s subconscious. Nightmare serves as one of Doctor Strange’s primary enemies. Check out what the villain looks like below.

It’s not hard to see where this is going. Something fishy is going on in WandaVision, and Wanda might be a tormented soul following the events of Infinity War. She was distraught and furious after Thanos murdered Vision, so it's possible her vulnerable and troubled mind could draw Nightmare to trap her in the Dream Dimension. Perhaps Doctor Strange will be called in to help Wanda escape, which will lead to the events of Doctor Strange 2. Or, Wanda could wake up from her dream, angered that it wasn't real, and unleash her power on the world. Either way, Nightmare could play a major role in both MCU properties.

WandaVision comes to Disney+ in late 2020.