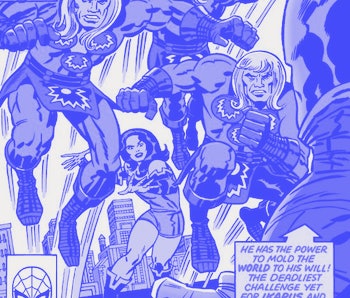 Marvel's Eternals is the next Marvel movie on deck after the delayed Black Widow, and since it's due to be released in the fall, fans are trying to fit together how exactly the film fits into the rest of the MCU. Eternals is unlike any other Marvel movie, focusing on a group of cosmic beings who have lived on Earth alongside humans for the entirety of human history. The upcoming movie spans the pre-historic era to the present day.

So why haven't we seen them yet? The comics may hold the answer to their absence, according to a new theory.

The Marvel Cinematic Universe has documented the superheroic actions on Earth since Iron Man in 2008, and the Eternals haven't appeared once. Perhaps there's a protocol reason to explain their absence.

A new theory points toward a non-interference rule among the Eternals tracing back to the comics. They lived among humans, but couldn't actively use their powers to affect human history, much like the Prime Directive mentioned so often in Star Trek. If this is true in the movies, it would explain why The Eternals didn't fight alongside Captain America during World War II. It might also explain why they didn't emerge to defend Earth against Thanos, the worst foe the Avengers faced.

We don't know much about the plot of Eternals, but we know they will fight against the Deviants. If they weren't even bothered to help out with Thanos, how much of a threat must the Deviants pose? If they're even worse than Thanos, the Deviants could become the overarching foe for Phase 4, and the danger will be established early.

The theory proposes another idea: perhaps the Celestials return, spurring the Eternals into action. This could allow the Eternals to step out of hiding and join forces with the Avengers to fight the Phase 4 dangers themselves. This would align with the comic books, where certain members of the Eternals briefly joined the Avengers.

There's a possible third reason the Celestials come out of hiding, despite not fighting Thanos. This time, it's personal. Possible plot leaks suggest Gemma Chan's character, Sersi, may fall in love and expose her true self to Kit Harington's character, Dane Whitman. This personal connection, and the wedge it drives between Sersi and the rest of the Eternals, could provide the impetus necessary for the Eternals to ignore all senses of protocol and protect the Earth.