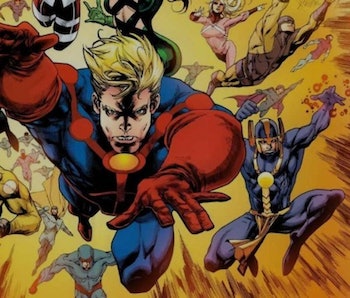 After Disney acquired 20th Century Fox, it was only a matter of time before mutants were introduced into the Marvel Cinematic Universe. This week, the first footage for next year’s The Eternals screened exclusively at Brazil’s CCXP, introducing fans to the Eternals’ evil counterparts, the Deviants. An intriguing new theory explains how The Eternals could finally bring mutants — like the X-men — to the MCU.

At the CCXP panel, Marvel Studios head Kevin Feige hinted that The Eternals would redefine the MCU in Phase Four. MCU Cosmic’s Jeremy Conrad tweeted out a variety of interesting points about the upcoming film: it takes place over 7,000 years, the Celestials will be involved, and Deviants will look different than their comic counterparts. Those last couple details really stood out to Conrad as a possible path to X-men in the MCU.

In the comics, the Celestials are godlike beings who are millions of years old. (Think of them like the Titans from Greek mythology.) In a roundabout way, the Celestials are the creators of humanity as we know it. It all began when they traveled to Earth and took up genetic experimentation on the earliest humans, called The Wanderers. As most experiments do in comics, the Celestials’ genetic testing went awry and created two distinct groups, the Deviants and the Eternals. While both factions were given superpowers and eternal life, the Eternals look human and the Deviants became disfigured due to — you guessed it — mutations.

It’s possible the X-Men are descendants of the Deviants. Or, they’re simply the descendants of The Wanderers the Celestials left behind. The crux of the idea is this: if the Celestials can genetically modify regular humans, then that opens the door for mutations to have manifested throughout history. Thousands of years later and voila! We get modern-day mutants, complete with powers.

We still don’t know how the timelines square up. We currently have no idea when the X-Men might end up in the MCU, or if Marvel will introduce them in Phase Four. After all, The Eternals was likely in development at Marvel long before Disney bought 20th Century Fox and the X-Men franchise along with it. Still, while The Eternals may not formally bring the X-Men characters into the MCU, the film might work to lay the foundation for the mutants’ backstory.

The Eternals will be in theaters November 6, 2020.