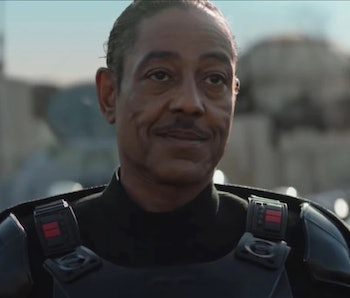 The Mandalorian has never wanted for villains. Mando has had his fair share of foes from the get-go, but the greatest of them is undeniably Moff Gideon. Giancarlo Esposito has mastered the villain archetype, and his Gideon, who’s continuing the Empire’s mission after the fall of Palpatine and Darth Vader, has been furiously pursuing Din Djarin and Grogu for two seasons now.

As we wait for Season 3, a leak suggests the big bad will get an overhaul that could mean a huge plot twist.

Star Wars NewsNet recently published a leak saying that Moff Gideon will get a new costume, complete with a helmet and jetpack, in The Mandalorian Season 3:

We’ve learned that in season three Moff Gideon will have new armor and a new helmet. The helmet will be black with red eyes and horns on it. The horns will be six, similar to what Darth Maul had. It will resemble a Mandalorian helmet, but it won’t be exactly the same as the other Mando helmets we’ve seen. It will look closer to Boba Fett’s helmet but it will be black, shiny, and very sleek. It will also be a bit bigger than the rest. Gideon is getting a full upgrade as he will also have a black and red jetpack.

There’s a lot to analyze here. First, there’s the Darth Maul reference. We’ve seen some fan theories claim that The Armorer, the mystical member of Children of the Watch who ousted Mando in The Book of Boba Fett, is referencing Darth Maul with her horned helmet. Could there be a connection between the two? If so, will Gideon factor in?

The helmet is apparently also “black, shiny, and very sleek,” which brings only one character to mind: Darth Vader. The similarity between Moff Gideon's and Darth Vader’s looks hasn’t gone unnoticed by fans, with some even wondering if Moff Gideon is modeling himself after his fallen commander.

But the most intriguing element is that the helmet apparently resembles Boba Fett’s. If that’s true, Moff Gideon may be planning to infiltrate the Mandalorian ranks with his own armor and jetpack. Thanks to The Mandalorian Season 3’s trailer, we know multiple Mandalorian characters will be involved in the upcoming drama. It’s possible Moff Gideon could blend in with the masses, and in doing so he could reveal a major flaw of the Watch’s “never remove your helmet” policy.

This leak is still unconfirmed, but it hints at some exciting possibilities for the upcoming season. Moff Gideon doesn’t appear in the Season 3 trailer, and this could be why; his new look is being held back as a big reveal. So don’t let his absence worry you. If this leak is to be believed, Moff Gideon is still around, and still has the same great villainous streak. He just has a new outfit to help with the evil.