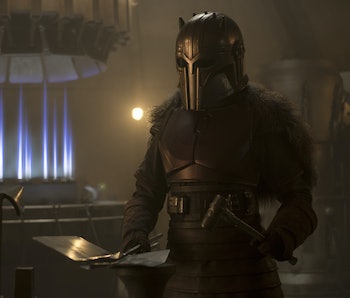 So it turns out Din Djarin is in a cult. At least, that's what Bo-Katan says. She realizes Mando's inability to take off his helmet means he's a member of the Children of the Watch, a zealous cult that divorced itself from Mandalorian society and sought to restore the ancient Way.

That's all we know about Mando's murky origin story for now, but one fan theory suggests the origins of the Watch may be a lot more sinister than first thought.

Every cult needs a charismatic leader, and Darth Maul more than fits the bill. Even though he's long dead by the time of The Mandalorian, that still doesn't mean he can't serve as a source of inspiration and borderline worship in a cult setting. After all, plenty of belief systems exist for countless years after their founder or leader dies. Maul could have established the "Children of the Watch" before moving in, leaving the group to keep indoctrinating new recruits into The Way.

It seems like a pretty flimsy theory at first, but the biggest clue was in plain sight back in Mandalorian Season 1. Looking back, we now know that the Armorer is also a Child of the Watch, but her distinctive helmet had one huge difference from Mando's — two horn-like spikes.

This definitely evokes Darth Maul's unique look and suggests that the Armorer — or whoever she inherited her helmet from — idolizes Maul to the point of imitation. Now that Mando has met Mandalorians who aren't part of the watch, he's starting to realize his experience is pretty far from the average Mandalore upbringing.

For a show entitled The Mandalorian, it doesn't seem like Mando knows that much about the history of Mandalore as a planet. This is understandable, as he was adopted into the culture, but Bo-Katan is just the tip of the ice planet when it comes to the many Star Wars characters who can teach him the truth about his own culture

And if this theory is true, then dismantling the Children of the Watch will mean tearing down the legacy of Darth Maul. After referring to the Jedi as "sorcerers" in Season 1, is The Mandalorian about to go deep on the Sith in Season 2?

The Inverse Analysis — Maul being behind the Children of the Watch would not only explain the weird way the Armorer talks of the Force and the Jedi-Sith dichotomy, it would also make Mando's investment in the fight against Moff Gideon all the more personal. Din wouldn't just be fighting against the remains of the Empire, he would be fighting against the same people who established his way of life.