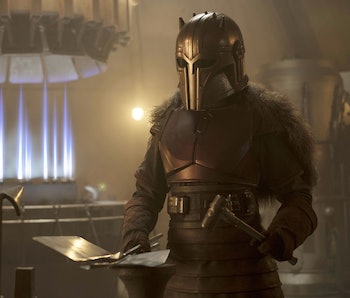 The Mandalorian Season 2 will be here before you know it, and with the recent announcement that Rosario Dawson will play fan-favorite ex-Jedi Ahsoka Tano, the series is now directly tied to Clone Wars and Rebels. This has prompted a flurry of theories about how the stories will tie together. And several of the most compelling ideas center on the mysterious Mandalorian blacksmith known as the Armorer.

The most recent theory comes from Reddit user JJaXFighter, who suggests the Armorer is Bo-Katan Kryze, the leader of Mandalorian squadron the Nite Owls. Bo-Katan, who appeared in both Clone Wars and Rebels, is the sister of Duchess Satine Kryze. The Duchess ruled the planet Mandalore until she was overthrown by Pre Viszla, the leader of the terrorist group Death Watch.

When Darth Maul killed Viszla and took the throne, Bo-Katan refused to recognize the Sith Lord as leader, and fought against him. So when the Jedi ousted Darth Maul, they named Bo-Katan leader of the planet.

Years later, in the two-part Rebels Season 4 premiere, Bo-Katan reappeared on Mandalore, telling Sabine Wren and Ezra Bridger she was overthrown due to her refusal to obey Emperor Palpatine. Sabine offers Bo-Katan the darksaber as the true heir to Mandalore. She initially refuses but eventually accepts the legendary blade.

If Bo-Katan shows up in Mandalorian Season 2, she could explain how Moff Gideon got his hands on the darksaber — assuming he didn't kill her to get it.

Bo-Katan would seemingly fit into The Mandalorian Season 2 quite nicely, but the evidence she's the Armorer in disguise seems circumstantial. The Armorer has horns on her helmet, prompting many fans to draw a connection to Darth Maul. A number of Mandalorians stayed loyal to Maul, and if the Armorer is one of them, that rules out Bo-Katan.

There's also the issue of the Jedi. Bo-Katan fought alongside the Jedi to oust Darth Maul, but the Armorer speaks about the Jedi as if they were myths and legends. So either that's Bo-Katan playing dumb, or it's someone else who really has no direct experience dealing with Jedi.

Then again, this might make sense as well. After all, if Bo-Katan is alive she clearly went into hiding to survive during Empire rule. If Bo-Katan really is the Armorer, she's gone to great lengths to hide her past.

One possible solution is that the theory is half right: Bo-Katan Kryze could appear in The Mandalorian Season 2 but not be The Armorer's secret identity. She could provide the story of how she lost her weapon and offer insight into Ahsoka's history. Regardless of whether or not this character will appear, it's worth looking back to her story and brushing up on Mandalorian history while we wait for the new season.

The Mandalorian Season 2 will premiere on Disney+ in October 2020.