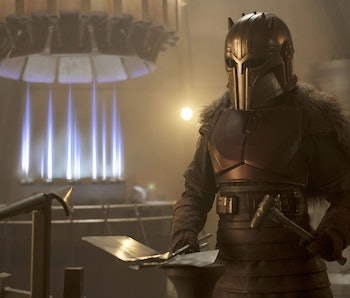 Ever since The Mandalorian finished its Season 1 run on Disney+, fans have created all sorts of incredible cosplays, painstakingly recreating every detail of the complex and meaningful costumes featured in the series. These efforts not only result in great outfits to wear to conventions, they may have actually revealed a possible plot point for Mandalorian Season 2.

Reddit user SwiftStart was studying a screenshot of The Armorer's costume for a cosplay when they realized what the golden, horned helmet meant in the greater scheme of Mandalorian history, all the way back to the events chronicled in The Clone Wars. And it could have huge implications when The Mandalorian returns this fall.

In The Clone Wars season 5 episode 16, "The Lawless," a coup upturns the political scene on the planet pacifist Mandalore, with the combined forces of Darth Maul and his Shadow Collective and the extremist organization The Death Watch, led by Mandalorian warrior Pre Vizsla, who wants his people to return to their warrior roots.

In the vacuum of an ungoverned planet, Vizsla turned on Maul and they, in true Star Wars fashion, had an epic lightsaber fight. Maul claimed victory, killing Vizsla with his own weapon: the mythical darksaber.

Sound familiar? The darksaber was also wielded by Moff Gideon in the final shot of The Mandalorian Season 1.

The defeat of Pre Vizsla split the Death Watch in two. While some wanted to stay faithful to Vizsla's extremist ideals, others sided with Maul and his Sith philosophy. It's a lot of lore, but here's where that cosplay comes back into play: When the Mandalorian and co. meet with the Armorer, her breastplate is red, and her helmet is horned, not unlike Darth Maul himself. Therefore, she (or whoever gave her the helmet) is one of those Death Watch members who sided with Maul.

With this in mind, it's likely these conflicts could serve a purpose in The Mandalorian Season 2. Is it possible that infighting among the remaining Mandalorians could resurface? There's another reason to think that's exactly where we're headed.

In Episode 3 of The Mandalorian Season 1, Mando fights with Paz Vizla, a fellow member of his tribe. The Armorer seems annoyed and diffuses the conflict, offering a reminder of The Way. If Paz Vizla is related to Pre Vizsla, and this seems likely since both characters are voiced by showrunner Jon Favreau, the tension between the armorer and Paz could go all the way back to the coup.

Of course, considering the passage of time, it's also likely the helmet may have been inherited from a mentor, as armorer practices would need to be passed down, and possibly helmets would too. Another possibility is that the Armorer is a second-generation Maul loyalist and The Armorer's parents passed the helmet to her.

Considering the effect we know The Clone Wars will have on The Mandalorian Season 2, there may be some hope we'll see flashbacks to the coup, possibly as a way to explore the roots of this mysterious armorer. And if these old tensions bubble back to the surface, well don't be surprised when the fragile unity among Mandalorians breaks down yet again.

The Mandalorian Season 2 premieres in October on Disney+.