“There's part of that little boy that had to have courage and be brave.” 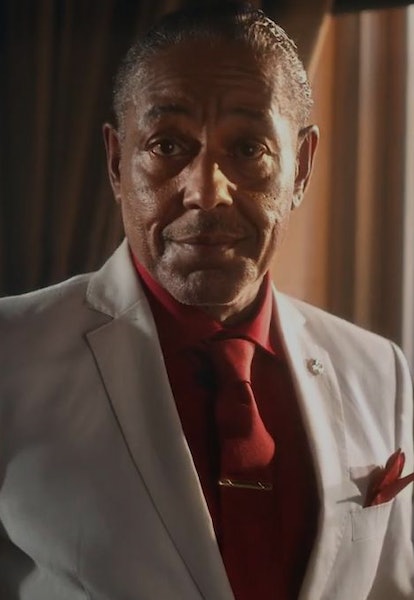 Much like myself, Giancarlo Esposito isn’t much of a gamer.

But we share a deep love for the Far Cry series. During our conversation about his role as dictator Antón Castillo in Far Cry 6, out October 7, we chatted at length about Far Cry 5’s canny depiction of mind-control tactics that go beyond mere violence.

“I liked the master manipulation of people, getting them to do what you need them to do,” Esposito tells Inverse. “I certainly have some experience in that with the characters I've played!”

Though Esposito has a rich and varied resume spanning from Do the Right Thing to the mysterious narrator of Dear White People, he’s best known for playing villains on smash-hit shows like Breaking Bad and The Mandalorian. And for good reason: he’s an incomparably charismatic baddie. He’s also one of the most enthusiastic actors in the business, approaching every role with a scholarly seriousness and childlike wonder, precisely the balance the Far Cry series aims to strike.

In an interview with Inverse, Esposito shares the unique challenges of motion capture, the childhood memories that shaped his portrayal of the Far Cry 6 villain, and weighs in on debates surrounding the game’s politics.

What do you want players to feel from Antón’s scenes with his son, Diego?

It's a very complicated relationship. I want you to feel the love of a father for his son. I want you to feel a father's disappointment that his son doesn't understand why he has to follow in his footsteps — what lineage means, the process of educating and empowering someone to be in a position to take your place and rule responsibly, or not.

I love the fact that as a parent, part of your responsibility is to know when to teach and when not to teach, when to lecture, when to engage, when to ask questions, when to listen, when to be affected by what you're hearing.

As Antón, I hear Diego say, “I like this girl. I have empathy for the people. Our people should be free.” Antón understands all that. But when does he understand, “Well, you could help them be free. You could rule them magnanimously”?

Far Cry 6 prompted a lot of discourse earlier in the year surrounding the intersection of real-world politics and games. What do you think Far Cry 6 says about the world we live in?

[Far Cry 6 Narrative Director] Navid Khavari! That dude is so in touch with the pulse of what was happening when he was writing this. It's been almost a year since we made it. I think the intention was to refer to our contemporary history in a way that is thrown back to things we've seen happen historically, without taking any particular example of that.

I sit here today, I'm moved by Nicolae Ceaușescu and Elena up against a wall being shot. That's what came to me today. That's just one dictator and his wife who did a horrible thing and had to pay for it. Our stories need to embody and reflect — not only as cautionary tales, but to inspire us to do it differently.

You've said in previous interviews that the motion capture performance is akin to performing in a stage play. Could you say more about the similarities between the two?

You're raw. I'm naked, wearing a fricking suit, it's all one color and shows every inch of every part of my whole body. Wardrobe can cover that up and you create a character.

I remember when I did a movie called Bob Roberts and I needed my costume. I not only had cerebral palsy and walked a certain way, but I needed to be covered. I was an introvert. I needed big things on me so people didn't see me. I was hiding. So for me, I was naked and raw physically.

It's almost like pilates. It's like a small movements that are internal. That's the actual work. It's not external work. It's like brainwork. For me, [Far Cry 6] was historical work about who this guy is, who he was before, and his relationship with his kid.

Was there a wife, how did she impact the kid? Okay, she’s dead. I’d figure that out, and then figure out who's the guide of the story, then appreciate the historical elements of what it's reflecting. But it's all interior.

I'm seeing myself in this funky weird suit. Then I'm seeing this camera in front of my face and lights. I have to look around all that and see the actor I'm working with. Finally, I let all that go and told myself this is a rehearsal for a stage play. You have to be present. Create what's not there.

It returned me to my imagination. It returned me to go, anything can happen. Anything can be, as long as you see it live it and you reflect it. They'll see it. You're doing it live while people are circling you with cameras while the camera's staring you in the face. That's all put together later as this huge tapestry.

I don't know that I would go watch every video game, but this one I will. It's so immersive as a first-person shooter.

You developed a rich backstory for Antón. Is there a particular factoid that you made up for him that isn’t evident in the game?

There's this whole piece of history about his childhood. I pulled from some of my history growing up, certain traits of that little boy who I think is still searching for acceptance.

I wanted to be live up to what my father thought I should be. My mother wanted me to be an opera singer. There's part of that little boy that had to have courage and be brave and who started in musical theater.

I can command the stage all the way in the back row. But I wanted to act. I wanted to be an actor. Why? Because I felt like during the time I grew up, African-Americans were on Broadway. I wanted to deepen people's journey through the stories I would tell. I wanted to get beyond my skin, beyond my trauma, beyond all of that, and just be a human being.

If you take on what's given all the time and you are empathetic — you feel that vibration — it's hard to come back and just be you, you know? I found that on stage was a place I could just be me. What may not have gotten into this piece was that little boy still searching for acceptance.

Moff Gideon or Antón Castillo: who wins in a battle of wits?

Moff Gideon. He's got superpowers! Moff Gideon knows everyone. You’ll see Antón has vulnerabilities and weaknesses that he will not be able to surmount. Moff Gideon is a deeper master manipulator, and he also does all of his own dirty work.

Far Cry 6 will be available October 7.