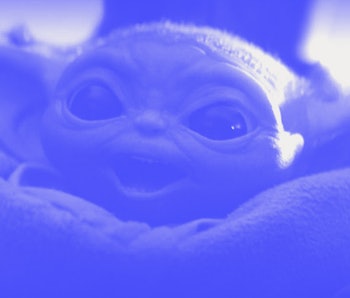 With The Mandalorian Season 2 coming soon, and possibly sooner than we think, the time is ripe for a refresher on where we left the taciturn bounty hunter and the youngster affectionately known as Baby Yoda. Last we saw, they were bound to find out more about Baby Yoda's Force powers, leaving their nemesis Moff Gideon standing on the wreckage of his TIE fighter, darksaber in hand. An intriguing new theory puts that iconic blade at the center of Gideon's shady plans for Baby Yoda.

Reddit user oldshitnewshit78 purports that the image of Moff Gideon is meant to emulate a fallen Sith leader: Darth Vader. Gideon is unlike other Moffs we see in the Star Wars universe. While most of them seem to spend their time in war rooms getting Force-choked by the higher-ups, Gideon is right in the thick of battle, fighting alongside the troops he commands. He's not one to sit idly by and talk strategy, he's got boots on the ground.

But if you compare Giancarlo Esposito's character to Darth Vader, his behavior isn't all that's unusual. Moff Gideon wears an all-black ensemble when most Moffs we've seen wear grey getups with fetching felt caps. Gideon's chest piece and long, flowing, black cape call to mind Darth Vader even more, and the fact he wields a lightsaber makes the comparison hard to deny. He's obsessed with Darth Vader's image and will do become like him. However, he's missing one crucial thing: Force sensitivity.

This is where Baby Yoda comes into play. Baby Yoda is Force-sensitive, and when we see him delivered to the Client, he is examined by a doctor. Later in that episode, the doctor is instructed to "extract the necessary material and be done with it." It sounds an awful lot like the ability held by Baby Yoda is highly in demand. The doctor was seemingly able to extract something from The Child, meaning that Moff Gideon still could use the extraction to find some way of making himself Force-sensitive.

What does this mean for Season 2 of The Mandalorian? Well, if Gideon is successful, the Big Bad just got a whole lot worse. Mando is gonna need some serious backup, and the most likely outcome is an epic showdown between Gideon and Ahsoka Tano.

Sith vs. Jedi. Darksaber vs. lightsaber. This would be an epic climax for the next season. Let's just hope we get to see Baby Yoda assist with his Force powers, too.