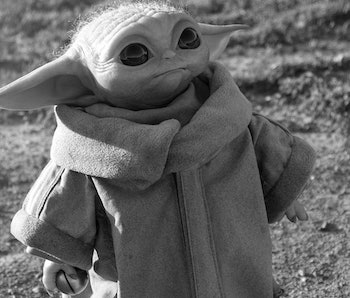 It may cause ire among fans, but there are a lot of benefits to Disney's infamous decision to de-canonize a huge chunk of Star Wars history. The non-canonical Extended Universe (commonly referred to as just Legends) can be used as an archive of ideas to pull storylines, planets, and sometimes whole characters into canon.

Dave Filoni, showrunner of The Clone Wars and Rebels and now co-showrunner of The Mandalorian, is notorious for exactly that, but in The Mandalorian Season 3, he could take his canon-meddling to new heights. Using a forgotten Sith backstory, it's possible Filoni and co. could solve a major mystery about the Jedi that we didn't even realize needed solving — while at the same time answering a huge question about Baby Yoda.

Within Legends, the Sith are not just an evil religion that use the Force to meet their own evil ends. They're also an ancient race from the planet Korriban, who revolutionized the use of the Force and established the Sith Order as Emperor Palpatine would come to know it millennia later. This use of "Sith" as both religion and race echoes how the term "Mandalorian" is treated in The Mandalorian — Din Djarin is of the Mandalorian creed, but Bo-Katan Kryze is of the Mandalorian race.

Another example: In Star Wars canon, there's a terrifying alien race known as the Grysk. They're roughly based on a Yuuzhan Vong, an invading alien race that served a similar purpose in Legends. Modern Star Wars took that concept, gave it a new name, and updated a few of the elements to match with current canon. This borrowing of backstory and lore lets the element grow and evolve while still acknowledging its Legends origins. The Mandalorian could use this approach with the non-canonical Sith backstory... and apply it to the Jedi.

What if the Jedi were both a religion and a race, and that race was Yoda's species? It would explain why every single member of Yoda's species we've seen so far from Yoda to Grogu to Yaddle has been incredibly powerful Jedi. That would make Grogu a Jedi in both ways, simultaneously distancing himself from and connecting him to Din Djarin, who wrestles with his clashing identity and creed.

The Mandalorian Season 2 raised a lot of interesting conversations on how you define a code of ethics and how you define yourself while Mando reckoned with taking off his helmet for the sake of protecting the most important thing to him — Grogu. If there's a way for The Mandalorian to expand on these themes in its next season, it would be by applying the opposite dilemma to Grogu, as he's a Jedi by birth but may not want to be a Jedi by creed if it means full detachment from his adopted dad.

One of The Mandalorian's biggest selling points is how it can explore and dissect really complex themes over the course of eight episodes rather than just one movie or an arc of Clone Wars. If such a huge concept like changing the origins of the Jedi is going to be included anywhere, The Mandalorian Season 3 is the place to do it. And thankfully, there's already a blueprint how in Star Wars Legends.