“There is no death; there is only the Force — and I am its master.” 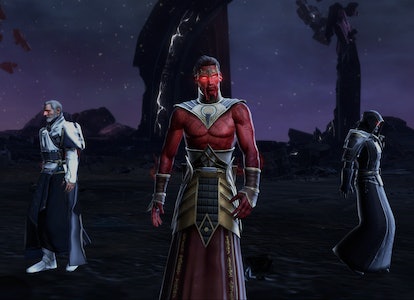 After jumping three decades into the future, Star Wars is finally looking back. Now that the Skywalker Saga is over, the span of the franchise is reaching places canon never has before. Between the High Republic print media and the nine new Star Wars series Disney+ is developing, Star Wars is now bigger than ever.

A bigger scope needs a villain to match, and there's no better fit than this non-canon Sith Lord who took multiple forms, each more evil than the last.

While there are many non-canon explorations of Star Wars' ancient past, the Old Republic series of video games, novels, and comics are the best example of showing the events of the galaxy thousands of years before anyone heard the name Skywalker. Among them lies the novel Revan, which followed the life of Prodigal Knight Darth Revan as he straddled both the Sith and the Jedi.

In this novel, the antagonist to Revan's already antiheroic character is the mysterious Darth Vitiate. Vitiate is basically the Palpatine of the Old Republic era, overseeing a master plan as Sith Emperor. That's not the only similarity, however. One of Palpatine's most infamous powers actually originated from this strange ancient Sith Lord.

5,000 years before the events of the original trilogy, Darth Vitiate was born with the name Tenebrae on the planet Medriaas. The illegitimate son of the planet's ruler, he staged a coup and seized power from his own father, then renamed the planet Nathema. Once in power, he began preparations for a horrifying ritual.

This ritual, aptly known as the Ritual of Nathema, demanded the assistance of 8,000 Sith. Upon their arrival, Vitiate used his Force powers to mentally enslave every living being on the planet. Over the course of ten days, he was able to leech the life energy of all of them. All life on Nathema died, but Darth Vitiate was granted the power of immortality.

Over the next 1,300 years, Darth Vitiate possessed a number of host bodies, known as "The Emperor's Voice," and eventually took on the body of Valkorion, as shown in the Knights of the Fallen Empire expansion for Star Wars: The Old Republic.

Darth Vitiate is known by many names and took many forms, which basically makes him a blank slate for introduction into Star Wars canon. Whether it's a mention in a High Republic novel or a flashback during a history lesson in The Acolyte, this Emperor-before-the-Emperor could provide some precedence to Palpatine's "essence transfer" powers evidenced in The Rise of Skywalker.

As genius as Palpatine is, it would be nice to see how his powers were discovered by those who came before him.