"Creatures half of myth, whom few have ever seen" 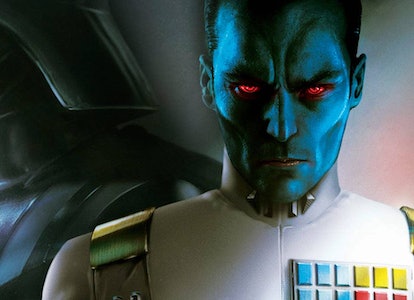 In the Star Wars universe, conflicts have always pitted light against dark, typically the Jedi vs. the Sith. Even in The Mandalorian, the conflict is between Din Djarin, the guardian of the Jedi future, against Moff Gideon, defender of the Sith legacy. What the Star Wars universe needs now is an outside force, beyond the inter-galactic struggles we've seen so far. This fan theory provides just that.

Redditor Gmb1t suggests the future of the Star Wars television universe lies in a strange species first mentioned in Timothy Zahn's canon novel, Thrawn: Alliances. In the novel, Chiss Empire officer and art lover Grand Admiral Thrawn warns Darth Vader of an incoming threat by the Grysk, a mysterious race from the Unknown Regions who have been surveilling the galaxy since the Clone Wars.

The Star Wars television universe is primed to introduce this species to screens everywhere. With multiple series being developed concurrently, the temptation for characters like Boba Fett, Din Djarin, and Ahsoka Tano to. cross paths again is too alluring to resist.

Thrawn, the only character who canonically knows about the Grysk, was last seen in the Rebels finale drifting into the Unknown Regions with Ezra Bridger. Ahsoka is searching for both, and Thrawn's knowledge could serve useful in the upcoming conflict.

The Mandalorian Season 3 would be the perfect time to introduce this threat: Lucasfilm's flagship Star Wars live-action show could establish the conflict, and Ahsoka's search for Thrawn and Ezra in her spinoff show could flesh out the need for a larger army. The next logical step? A massive, series-spanning team-up.

This theory suggests the team-up will be larger than we've seen in the past from The Mandalorian and will eventually lead to Thrawn and his fellow Chiss defending the galaxy. That means sworn enemies Thrawn and Ahsoka will have to put aside their differences — and help each other.

The Grysk are a gruesome species who replaced their teeth with implants that can be used as both weapons and communicators. Their most terrifying tactic is how they recruit reinforcements — they enter an individual's mind and manipulate their darkest fears to transform them into a "client species." According to the novel, the Chiss believed it only took three Grysk to take over a nation, and 100 to take over an entire planet.

The Grysk seem to be a canon replacement for the Yuuzhan Vong. In Legends stories, the Yuuzhan Vong were characterized as strange and mythical barbarians who also used wildly powerful body modifications. The two species are similar, but the Grysk are distinctive enough to allow for further innovation as the Star Wars universe evolves.

Like the Marvel Universe before it, the Star Wars Universe needs a single foe to unite its most powerful figures, no matter their differences. The Mandalorian exemplifies this by showing the villagers of Mos Pelgo and the Tusken Raiders uniting against the Krayt Dragon, and Ahsoka and Mando uniting against Magistrate Morgan Elsbeth. The next step, surely, is to unite both the New Republic and what remains of the Empire against a terrifying foe.