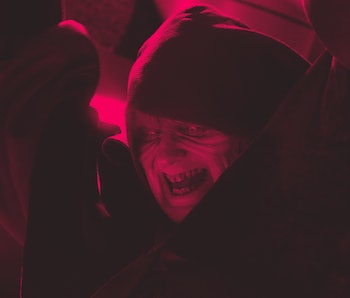 The Mandalorian Season 2 is already one of the most-talked about shows, and it's still months away from airing. The Disney+ show will see the return of several Season 1 characters and other familiar faces from across the Star Wars universe, presumably including Rosario Dawson as the live-action Ahsoka Tano. In a surprising development, Darth Maul actor Ray Park recently hinted at a potential role in The Mandalorian Season 2. Let’s break down what his return could mean.

Park recently posted an image of the Sith logo to his Instagram alongside a caption that read: “This is the Way.” Naturally, the implication is that Park will have an important role to play in The Mandalorian Season 2. Check out his post below.

The Mandalorian Season 1 ended with Moff Gideon surviving the crash of his TIE Fighter and emerging from the wreckage with the Darksaber. We don’t yet know how Gideon managed to get his hands on the double-bladed weapon. That’s where Maul might come in.

The Disney+ show is set after the events of Star Wars: Rebels, which saw Obi-Wan Kenobi kill Maul in a lightsaber duel. However, there’s a chance that Maul could be seen in flashbacks that tie directly back to the Darksaber, the ancient Mandalorian lightsaber that was in Maul’s possession for a time.

The Sith lord fought with the double-bladed weapon in several battles before it was taken by Sabine Wren, a prominent Mandalorian of House Vizsla, in Rebels. What’s more, we know that Ahsoka Tano will appear in Season 2. It can’t be a coincidence that her appearance is now followed up by a hint that Park could return as Maul. The two characters share a history and Ahsoka fought Maul during the Siege of Mandalore in The Clone Wars. If Maul does appear in a flashback, we could see this battle play out in live-action on the show.

Of course, another possibility is that Park’s involvement in The Mandalorian has nothing to do with Darth Maul at all. He's an accomplished stunt actor and could be coming back to Star Wars in an entirely different capacity, or as a new character.

Since Maul is already dead in the show’s timeline, Park may be playing another bounty hunter tasked with capturing Baby Yoda. Perhaps he’s even working with Gideon. Conversely, we could be reading too much into this and Park simply posted the photo in preparation for Star Wars Day on May 4. Either way, Park’s possible return to the world of Star Wars — whether as Darth Maul or someone else — would be welcome.

The Mandalorian Season 2 is scheduled to premiere on Disney+ in October.