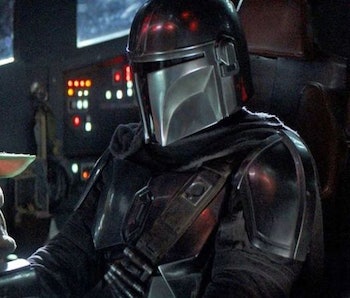 The wait for The Mandalorian Season 2 is getting steadily shorter. With only two episodes of The Clone Wars left, fans are already looking to the villainous hives of the Outer Rim for new Star Wars content. A new leak claims to reveal the episode titles for Season 2. If accurate, this leak traces a pretty clear path for the stroy to come, including what promises to be a thrilling conclusion.

Twitter user @Vullein leaked the eight episode titles, which you can see below. They previously leaked the second Birds of Prey trailer accurately, but there's no official confirmation on whether this leak is credible just yet. These titles fit the same "The (noun)" naming convention as the first season, while hinting at a much different plot for the second wave of episodes.

Last we left Mando and The Child, they were off to look for a Jedi to explain Baby Yoda's abilities and possibly train him. This explains Chapter One, "The Search." However, it doesn't seem like that search will be straightforward.

It's all but confirmed Clone Wars protagonist Ahsoka Tano will make her live-action debut in The Mandalorian Season 2. However, these titles suggest that she won't make her entrance until late in the season. She'll probably show up in Chapter Six, "The Sorcerer," as the Jedi were exclusively referred to as sorcerers in Season 1 of the live-action Disney+ show.

Ahsoka making her Mandalorian debut fairly late in the season has some pros and cons. It may mean the majority of the season will be the self-contained, one-off adventures, just like the show's freshman outing. These are the heart of The Mandalorian, and one of the benefits of a television series as a medium.

Chapters Seven and Eight prove very interesting. The titles "The Return" and "The Empire" are obvious homages to the Original Trilogy, but remain enticingly vague. However, fans can count on a return of Moff Gideon in a big way, probably with Ahsoka and her lightsaber facing off against him and his darksaber. It may be her return that prompts a confrontation with the remnants of the Empire.

In an interview with Variety, actor Giancarlo Esposito revealed he's already broken several prop sabers. "I’ve gone through two, three? Three and a half, I think I’ve broken already," he said, hinting at the dramatic battles in store for The Mandalorian Season 2.

"He does his own dirty work and is certainly willing to. He’s much more volatile, he’s much more of the warrior and that could tell us some things about him next season,” the actor elaborated, suggesting Gideon's willing to do almost anything to get his hands on our favorite green tot, even if he has to go through Ahsoka to do it.

Pre-production for Season 3 of The Mandalorian is already underway, so there's a chance the second season may arrive sooner than the announced October premiere. If Lucasfilm is able to move up the premiere, there's a slim chance we might find out more following the release of the behind-the-scenes documentary of The Mandalorian. The first of eight episodes debuts on Star Wars Day, May 4.

Until then, Disney+ viewers can catch up with the events of The Skywalker Saga in its entirety and prepare for Ahsoka's return with the entirety of The Clone Wars.

The Mandalorian Season 2 will premiere on Disney+ in October 2020.