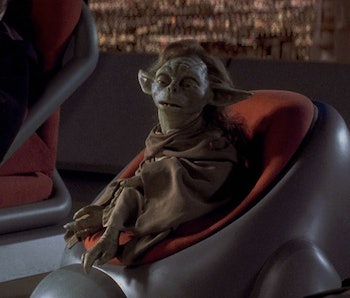 We all know Sheev Palpatine used an override chip in every Clone Trooper's brain to wipe out the Jedi in Order 66, but we still don't know what happened to a couple of key Jedi. Ahsoka Tano survives — and we're about to find out how on Clone Wars Season 7 — but maybe if we're lucky, the animated series will address another lingering mystery: Jedi Master Yaddle.

And if Yaddle fans get some closure on Clone Wars, it could also answer some major questions about Baby Yoda ahead of The Mandalorian Season 2.

As we approach its series finale, The Clone Wars has officially crossed over into the events of Star Wars: Episode III — Revenge of the Sith. Episode 10 of the Disney+ cartoon revealed that Count Dukoo was already dead (and Obi-Wan wasn't too happy about it) and the remaining two episodes of Clone Wars Season 7 will likely reveal even more about Revenge of the Sith.

Based on early trailers for The Clone Wars Season 7, we know this season will show the events of Revenge of the Sith from new perspectives. That could include Order 66, which only gets a few moments of screentime in Revenge of the Sith. And if that happens, we might just find out what happened to Yaddle.

In case you need a reminder, Yaddle was the only other member of Yoda's species depicted in Star Wars — until The Mandalorian, of course. A female member of the species, Yaddle served on the Jedi Council alongside Yoda and appears several times early on in the prequels trilogy. However, she later steps back from her leadership position, and by the time to Clone Wars begin she's been replaced on the Council.

That means when Order 66 rolls around, Yaddle is already missing in action. We have no idea whether she lives or dies, though she does turn up one more time in a Force vision experienced by Darth Vader when he attempts to resurrect Padmé Amidala. (This happens in a Star Wars comic where Vader kills Yaddle, but it's a vision so it doesn't count.)

In the Star Wars Extended Universe (meaning the pre-Disney stuff that's no longer canon), Yaddle actually dies before the Clone Wars. While on a mission with Obi-Wan Kenobi and his then-Padawan Anakin Skywalker, she sacrifices herself to save an entire city from a deadly chemical weapon. But again, that's not canon, so it doesn't count.

Why does any of this matter? Well, the point is, Yaddle's fate remains a mystery in the Star Wars story. Until recently, no one really cared, but after Baby Yoda showed up in The Mandalorian, that all changed. Plenty of people even speculated that Yaddle could be Baby Yoda's mother (presumably with original Yoda as the father).

What matters, though, is that while Yoda is already dead during the events of The Mandalorian, Yaddle might be alive. And that means she could turn up in The Mandalorian Season 2 to help unite Baby Yoda with his species, or at least explain how their species works in the first place.

Before any of that can happen, though, the Clone Wars finale needs to confirm once and for all whether Yaddle survived Order 66 at all. With just two episodes left, there's still hope that one of the weirdest and most mysterious Star Wars characters could finally get the closure they deserve.