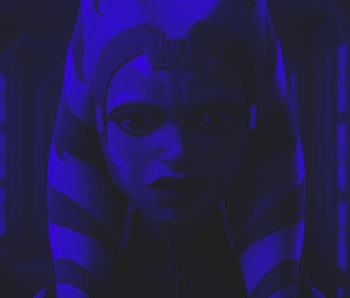 The end of the Republic and the end of the Jedi is nigh in the first trailer for the final season of Star Wars: The Clone Wars, which obviously means that by the end of Season 7, the show has to catch all the way up with the end of the prequel trilogy. As such, the Season 7 trailer — which confirmed a premiere date of February 21 on Disney+ when it was released Wednesday — includes a few crossover moments with Revenge of the Sith that anyone who's recently rewatched Episode III recently might recognize.

What's more, a huge portion of Clone Wars Season 7 also serves as a flashback to some key moments in Star Wars history that could inform the plot of The Mandalorian Season 2.

It's natural to assume that The Clone Wars will end where the war itself did, at the exact moment Chancellor Palpatine executed Order 66 and created the Empire, revealing he had been manipulating the Galactic Republic and Confederacy of Independent Systems into conflict all along. Season 7 will seemingly chronicle the weeks and months leading up to Order 66, and one of the moments shown in the trailer is a conference call between members of the Jedi Council and a clone trooper commander. In the full scene from Revenge of the Sith, the clone leaves the call after informing everyone that Obi-Wan Kenobi has made contact with General Grievous. Anakin is ordered to tell Palpatine about it so they can gauge his reaction.

"I sense a plot to destroy the Jedi," Mace Windu says to Yoda, along with Jedi Masters Ki-Adi-Mundi and Aayla Secura. They would both later be killed by their own clone troopers under Order 66. What's interesting is that in a scene from The Clone Wars Season 7 trailer, Mace Windu is shown as a hologram rather than in-person, like he is in Revenge of the Sith. Whose perspective are we seeing then?

Here's that same moment in video form, where Yoda appears as a hologram in both to say, "Grave care, we must take."

As one fan noted on Twitter, this means that during The Clone Wars, our perspective will be that of either Ki-Adi-Mundi or Aayla Secura in a way that further contextualizes the Jedi Council's suspicions about Palpatine leading up to Order 66.

The other big crossover moment related to The Mandalorian has everything to do with the Siege of Mandalore, originally detailed in the novel Ahsoka but also mentioned by Moff Gideon later in The Mandalorian Season 1. While Mando and friends were trapped inside the cantina, Moff Gideon threatened them with an E-Web heavy repeating blaster. He also brought up an event on Mandalore called "The Night of a Thousand Tears" that allegedly took place during the Siege of Mandalore where the weapon's previous model vaporized many Mandalorian soldiers.

"Or perhaps the decommissioned Mandalorian hunter, Din Djarin, has heard the songs of the Siege of Mandalore," Moff Gideon said in the Season 1 finale, "when gunships outfitted with similar ordnance laid waste to fields of Mandalorian recruits in The Night of a Thousand Tears."

The Siege of Mandalore is one of the final battles of the Clone Wars in which Ahsoka Tano and clone captain Rex led troopers on a mission to capture Maul, who had taken control of Mandalore via a puppet leader Prime Minister Almec. These events, including a confrontation between Maul and Ahsoka Tano, are shown during the trailer, but might we also see the infamous Night of the Thousand Tears?

Particularly because Moff Gideon has the Darksaber by the time of The Mandalorian, we're bound to learn a lot more about the weapon during this era. Maul had the Darksaber for years after the Siege of Mandalore before Sabine Wren claimed it from Dathomir several years before the original trilogy. Last we saw of it in Star Wars Rebels, the Darksaber belonged to Bo-Katan Kryze.

All things considered, The Clone Wars Season 7 seems primed to deliver many different Easter eggs that connect it to other parts of the Skywalker Saga — and perhaps even beyond.