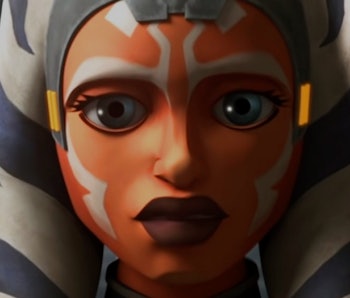 What happened to Ahsoka "Snips" Tano in-between Revenge of the Sith and Star Wars Rebels has been partially explored. It's been hinted at in books, comics, and snatches of dialogue. But as The Clone Wars Season 7 heads towards its epic finale, there's a chance Order 66 didn't impact Ahsoka the way we thought. A new leak claims Ahsoka's final contact with any other living Jedi already happened, and if that's true, she's headed for a heartbreaking series finale.

Speculation and possible spoilers ahead for The Clone Wars finale.

Assuming Rosario Dawson really does end-up playing a live-action version of Ahsoka Tano in The Mandalorian Season 2, we'll have two possible gaps in Ahoska's timeline: What she did in-between the end of The Clone Wars and the start of Rebels, and then, what she did in between the end of Return of the Jedi and the start of The Mandalorian. But, in theory, one of those gaps is about to be closed as we learn how did Ahsoka survive Order 66?

Prior to her appearance as the Rebel contact code-named "Fulcrum" in Star Wars Rebels, casual fans could make the following assumption: Ahsoka survived Order 66 because when it was carried out, she was no longer a member of the Jedi Order, presumably living in exile after the events of the Season 5 episode "The Wrong Jedi." But what Clone Wars Season 7 has revealed is that almost immediately after going into exile, Ahsoka actually came back into the war effort real hard.

Episode 9 "Old Friends Not Forgotten" reveals she was unofficially put in charge of half of the 501st battalion of Clone Troopers. Along with Captain Rex, Ahsoka is headed to the Seige of Mandalore, where we now know she's going to have a huge showdown with Maul.

But here's the twist: Apparently Rex and Ahsoka's Clone Wars story won't end on Mandalore. At least, according to a new leak.

This week, according to the Star WarsLeaks subreddit, two descriptions and titles for the last two Clone Wars episodes have been revealed. Here's what StarWarsLeaks says those are:

After capturing Maul on Mandalore, Ahsoka's journey to the Jedi Council is disrupted when Order 66 is declared.

Ahsoka and Rex must use their wit and skills to survive the turbulent end of the Clone Wars.

What we know has to happen — So, a few things here. First, it seems like Ahsoka will somehow defeat Darth Maul, which will depose him as the shadow-ruler of Mandalore. Second, it seems likely that if Maul is her prisoner, she'll want to take him to the Jedi Council to get justice.

This kind of makes sense. If Ahsoka brings back a former Sith Lord as a prisoner, the Jedi might reinstate her within the Jedi Order.

But of course, that can't happen, because history will get in the way. By 10 BBY (about a decade after the events of The Clone Wars and Revenge of the Sith), we see Maul riding high as a huge crime boss within the syndicate Crimson Dawn. (This happened in Solo.) So, Ahsoka's goal of holding onto a captured Maul has a pretty short shelf life.

Even more revealing is the idea that Ahsoka will be en route to the Jedi when Order 66 happens. This strongly implies that Ahsoka's last interactions with any living Jedi for roughly two decades have already taken place.

If Ahsoka doesn't make it back to Coruscant before Order 66, then the last time she saw Anakin Skywalker was the moment in Season 7 Episode 9, when he gave her back her two lightsabers. After that point, Anakin Skywalker is Darth Vader, and (nearly) all the Jedi are dead.

The idea that Episode 9 is the last time Ahsoka saw Anakin Skywalker until her duel with Vader in "Twilight of the Apprentice" is probably something you could have figured out before, but the idea that Obi-Wan and Anakin were the last Jedi she saw before most of them were killed is relatively new information. Ahsoka won't see another Jedi until she meets Kanan in Rebels. This means she'll experience the heartbreak of Order 66 not only as a non-Jedi, but also as someone in danger of being murdered.

What we don't know... yet — That said, there's a wrinkle to this leak that we still don't fully understand. We know Rex is somehow able to avoid his Clone programming and not betray the Jedi during Order 66. What we don't know is how he does this and what role Ahsoka plays in all of that.

If Rex and Ahsoka are hanging out when Order 66 comes through, it's kind of unclear what that means for Ahsoka. Will Rex be compelled to kill her? Is Ahsoka's hazy status as a non-Jedi actually the key to all of this?

Perhaps the only thing Rex needs to subvert his conditioning to follow Order 66 is a technicality. In Revenge of the Sith, Palpatine declares "every single Jedi is now an enemy of the Republic." But as Obi-Wan pointed out in "Old Friends Not Forgotten," Ahsoka isn't actually part of the Grand Army of the Republic, a fact that might be the reason why she's still alive well after the events of Return of the Jedi.

The Clone Wars airs its final three episodes on Disney+ over the next three Fridays.